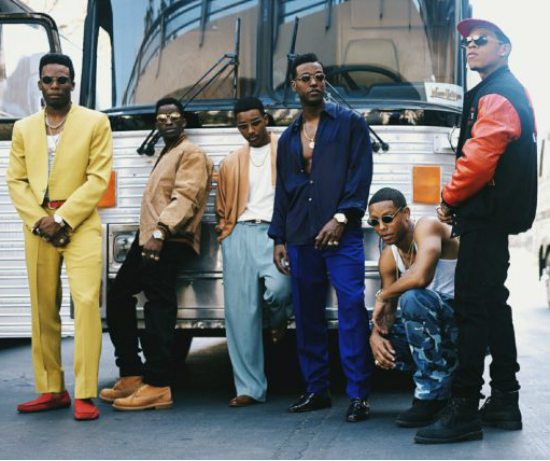 New Edition is one of the most iconic R&B groups in history, which is why BET decided to turn their story into a movie. After surviving three decades in the music industry, we get to watch the many layers that make up The New Edition Story, a miniseries that will air over three nights. During the 2016 BET Awards, the network released a first look at the film in a dramatic trailer. We watch Ricky Bell, Michael Bivins, Ronnie DeVoe, Ralph Tresvant and Bobby Brown start as youngsters in Boston and ascend ascension to new heights. We also get to see Johnny Gill enter the picture as Bobby is pushed out while scenes of the band's greatest hits, contract disputes and fights flash on our screens. The miniseries is sure to hold our attention — and did we mention there's plenty of eye candy?

The cast, which thankfully looks pretty similar to the original members, includes Empire star Bryshere Gray (Michael Bivins), Elijah Kelley (Ricky Bell), Algee Smith (Ralph Tresvant), Keith Powers (Ronnie Devoe), R&B crooner Luke James (Johnny Gill) and Woody McClain (Bobby Brown). Newcomers Dante Hoagland, Caleb McLaughlin, Jahi Winston, Myles Truitt and Tyler Williams play the younger versions of the group's members. What makes the movie even more epic is that New Edition was involved in the making of the film, serving as consultants and co-producers — yes even Bobby, who is also listed as a producer. The cast and crew, like Luke James for example, have been keeping us on our toes by posting multiple videos and images behind-the-scenes of the movie on Instagram over the past few weeks.

The star-studded cast also includes La La Anthony (Ronnie DeVoe's mother), Yvette Nicole Brown (Michael Bivins' mother), Monica Calhoun (Ralph Tresvant's mother), Lisa Nicole Carson (Ricky Bell's mother) and Sandi McCree (Bobby Brown's mother). Wood Harris, Brooke Payne, Michael Rapaport, Faizon Love, Duane Martin, Tank and Bre-Z are also featured in the cast. Judging from the cast and the trailer, it looks like we'll be more than occupied for three whole nights. Although we'll have to wait until 2017 to mark our calendars, cancel dates and organize our watch parties, you can scoot on over next to us and watch the trailer for The New Edition Story right here.