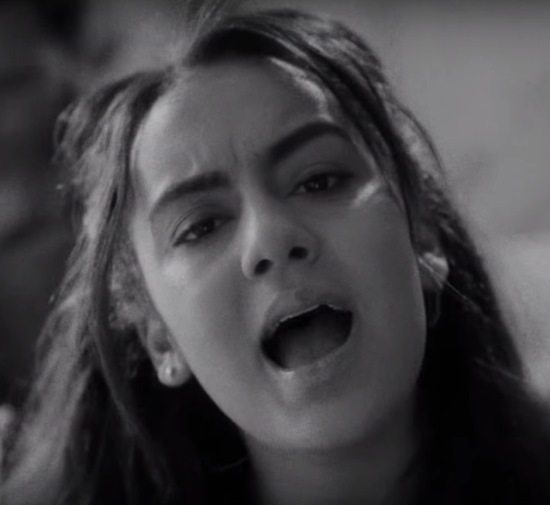 Chances are, you were familiar with the work of German-bred singer/songwriter Bibi Bourelly long before she dropped her debut EP Feel the Real (Pt. 1) last month. In addition to working with Usher, Lil Wayne and Nick Brewer, the Def Jam signee penned Rihanna's popular hit "B***h Better Have My Money" and ANTI ditty "Higher." She is continuing to generate buzz and gain fans thanks to her visceral lyrics and carefree, raspy vocals. But she's also making her mark by taking a stand against worldwide injustice.

We already felt her impact when she helped Usher make a bold statement on police brutality and social justice with "Chains." But now, as we're still reeling from the terrorist massacre at the Pulse nightclub in Orlando, she's released a video for her 2015 song "Riot." The clip was actually filmed before the weekend's horrific event which claimed 49 innocent lives and injured dozens more. But the singer released a heartfelt message to accompany the powerful images shown throughout the video for the acoustic tune.

Sometimes when I'm on a plane, flying from country to country, city to city, chasing this peculiar dream of mine... I look down at the world beneath me and realize what we really are in the grand scheme of things.

If you pay close attention, when the plane is just taking off you can faintly see people in action, living their own lives.

It's ironic and charming in a weird way because they're not even aware that someone else is admiring them with fascination from a different angle of the world, as they walk this distinctive earth of ours.

Thousands of tiny, moving heads eventually blend in with the landscape as the aircraft rises higher. The large swaying trees that appear to be so mighty from the ground, shrink into what appears to be green fragments of leaves...and by the time we reach the clouds, everything that we thought to be its own individual thing, every detail of anything that we ever considered to exist on its own, melts into the the scenery and we become one.


We are not one voice, we are a roaring crowd.

We are the land and sky; We are an ambiguous mixture of every color that exists under the sun.

We are all in this together and we are responsible for each other.

Everything you do or say matters to us, whether you realize it or not.

Love infinitely. At all costs no matter what.

praying 4 Orlando
(and the rest of the entire world.)
Fighting 4 our future.

New society 4 the unity of all.

Like Bibi, our thoughts and prayers go out to the families of the victims as well as the survivors of this tragedy. Watch the video below, get caught up on Ms. Bourelly's music via SoundCloud, grab yourself a copy of Feel the Real (Pt. 1) and keep up with the singer via her website and Twitter.


TAGS:  Bibi Bourelly, rihanna, usher
Previous: Keke Palmer Shines In ‘Yellow Lights’ Next: Aaron Camper & DJ Dilemma Salute Their Crushes From Back In The Day With ‘My Baby’