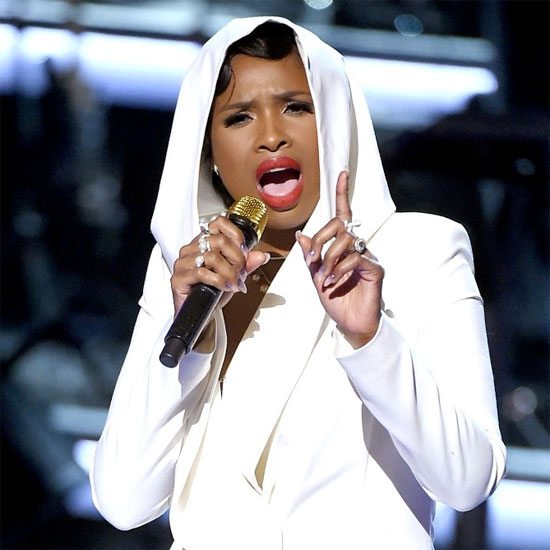 After Bilal set the bar high with his performance, everyone was watching to see who'd do what next in tribute to the Purple One. Up for the challenge was our beloved Stevie Wonder who appeared with Madge on that abysmal Billboard Prince tribute who was at BET Awards 2016 to redeem himself. Unfortunately, the producers paired him with Tori Kelly to make a duet of Purple Rain's "Take Me With U" and it didn't work by ay stretch of the imagination. Stevie was not having the best night vocally and Tori is typically a strong singer, but their voices didn't blend well together nor did they capture the flirtatious sexiness of the song. Despite this pairing not working, the band was jamming on the one and they continued in that vein for the second half of the performance with Jennifer Hudson.

Jenny from Chiraq was tasked with singing "Purple Rain," and she strutted right out and took it to church. Dressed in a striking white hooded mini-dress/coat, she didn't exactly look like a gospel singer but she surely sounded like one belting out this Prince hit. The American Idol alumna was in fine voice and although she oversang at the beginning of her performance, she reigned things in. Wonder and Kelly stuck around on keys and guitar respectively and also provided background harmonies for Hudson. The Roots guitarist Kirk Douglas joined JHud center stage to perform the track's iconic guitar solo, and the audience stood to their feet take in this magical moment and wave their hands in the air. Jennifer soon launched into the outro and walked off the stage still singing, leaving behind a venue full of people in their feelings.