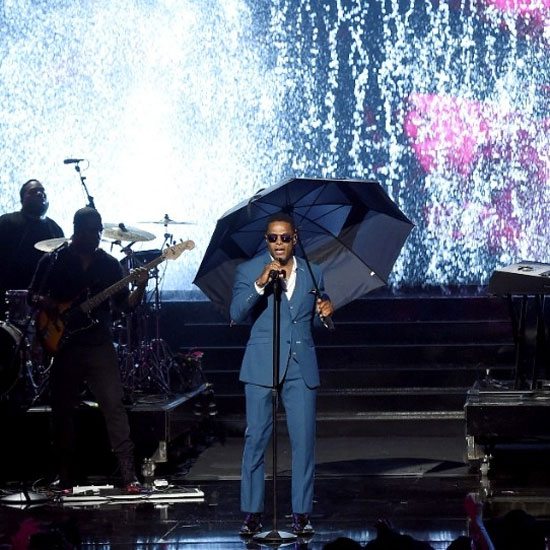 With the release of Maxwell's blackSUMMERS'night later this week, it was a no-brainer that he'd be at the BET Awards 2016 to perform. The "Lake By the Ocean" singer stood onstage under an umbrella while video footage of waves were projected onto him and sheets of water fell from the ceiling behind him. The forever dapper soul man was in full heartthrob mode in a tailored three-piece suit, and he made us all want to get cozy with him under his umbrella-ella-ella-ay as he started singing SUMMERS' lead single. He eventually shed his umbrella, suit jacket and sunglasses and really got into the catchy jam as he moved around the stage as sexy as ever.

Max's performance of "Lake By the Ocean" came to an end, but he was far from finished. The music changed, and Prince heads immediately caught the tune of "Nothing Compares 2 U" before Maxwell began singing, "It's been 7 hours and 66 days since you took your music away." The exact time reference to how long Prince has been gone was made even more clear when a digital clock appeared behind the band. That stark reminder was a gut punch, but Maxwell soothed our souls with an impressive rendition of the song that stayed true to the originator but had his stamp all over it, including some reworked lyrics that referenced the Purple Yoda. "I can play my radio station in anyplace I want / But nobody ever sounds like you / I went to the record store, I went to the Apple and Spotify, too / They said, 'Boy, you better make some music' / Cause Prince is the truth!" Yes, Prince is certainly the truth and so was Maxwell's performance. We certainly wouldn't be mad if he followed his up and recorded a studio version.