Biscuits & Gravy Bring The Noise And The Funk With ‘Heartbreaker’ 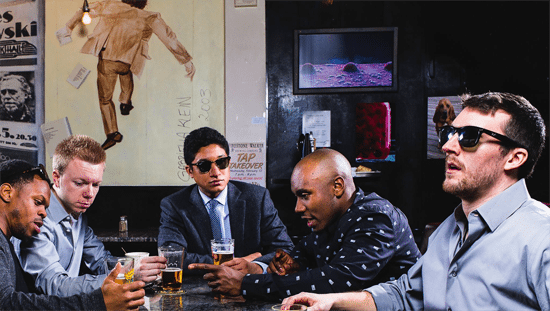 Boston-based pop/funk/soul outfit Biscuits & Gravy takes inspiration from a variety of musical sources and eras. However, it's the disco sound of Michael Jackson, by way of Justin Timberlake and Mayer Hawthorne, that prevails on their current song, “Heartbreaker.”

“Heartbreaker” tells the tale of a woman who loves getting men hot, bothered and all in their feelings before dancing right out of their lives. “Pushing up on me / You know you love it, babe / I’m not trying to play games,” lead singer David Huddleston croons as he goes through the motions, attempting to succeed where lesser men have failed. The uptempo track starts with a strong horn section before breaking into a bass guitar-led groove filled with handclaps, drums, along with a kitchen sink or two. While the instrumentation on the song is top notch, the vocal performance isn’t anything to scoff at, especially the heartwarming harmonies that close out the song.

“Heartbreaker” is the lead single from the band’s upcoming album, Young Love, due later this summer. Until then, you can pick up “Heartbreaker” on iTunes or listen to it on Biscuits & Gravy's SoundCloud page. Keep up with the fellas of Biscuits & Gravy via their website, Facebook, Twitter and Instagram.


TAGS:  audio, Biscuits & Gravy, david huddleston, justin timberlake, mayer hawthorne, michael jackson
Previous: Beyoncé Makes It Clear That She Ain’t ‘Sorry’ Next: Morning Soul: If You Take Your Love From Me Then What Do I Have