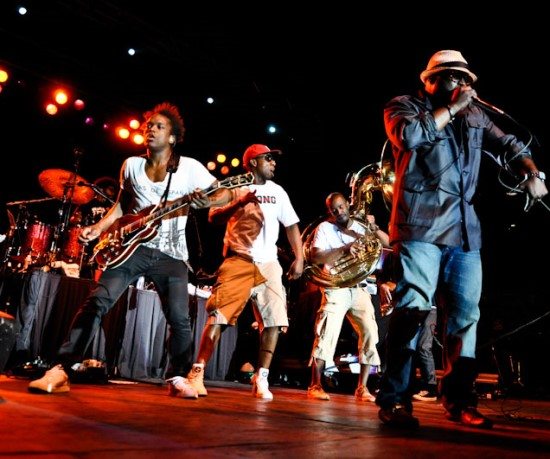 Whether or not you've ever had the privilege of attending the Roots Picnic in Philadelphia, it's a known fact that concert is one of the most incredible musical events you'll ever witness. Having spent the last nine years throwing Philly's dopest party, The Roots continue to show-and-prove why their reputation is well-earned — playing killer sets, backing some of the biggest names in music and delivering surprise collaborations. While the legendary hip hop band is known for their spontaneity, no one expected the major announcement that came towards the end of last weekend's show.

The June 4th festival was another scorcher thanks to performances by Leon Bridges, Anderson .Paak, Chloe + Halle, Kaytranada, Ibeyi, Willow Smith (with surprise guests dad Will Smith and DJ Jazzy Jeff), Jidenna, Blood Orange and many more. After igniting the stage with headliner Usher, the crew got the crowd good and hyped with a surprise appearance by Lil Jon (for a performance of club banger "Yeah!") who opined that Mr. Raymond and The Roots should take their show on the road. In response, Black Thought revealed that the Roots Picnic will indeed hit the road...to New York City!!

By bringing the show to NY, the Illadelphians are showing some major love for their home-away-from-home (thanks to their nightly Tonight Show gig) in the best possible way. For starters, the daylong event has been expanded to two days. The fellas have big plans for Bryant Park as Questlove reveals (via Billboard), "There's going to be pop up shops there, really good curated food, comedy, DJ parties there and acts that you wouldn't expect... We're deeply involved in everything, from the grass area to the food you're gonna eat to the music you're gonna hear in between. We're a part of all of that." With regards to the "music you're gonna hear," manager Shawn Gee provides further insight, saying, "With every artist at the festival, whether through the years in Philly as well as now in New York, there's some sort of story or direct or indirect relationship with the Roots....And then what we try to do to differentiate with our headline sets is to try and create unique experiences that can only be given to you by the Roots."

We know. You already wanna go and we haven't even revealed the line-up yet. Go ahead, take a moment to mark your calendars for October 1st-2nd and get started on those travel plans (if you're not local). But just for kicks, here's a snippet of the roster that will have you screaming "Shut up and take my money already!": D'Angelo, John Mayer, Wu-Tang Clan, Nile Rodgers, David Byrne, Trombone Shorty & Orleans Avenue, Yuna, Jeremih, EPMD, Bibi Bourelly and Swizz Beatz. As an added bonus, comedians Jerrod Carmichael and Neal Brennan will be on hand to make us laugh. Unfortunately, Usher isn't scheduled to perform, so it's not quite what Lil Jon hoped for. But with two days of awesomeness in The City That Never Sleeps, we can all agree that The Roots have more than made up for it.

Peep the flyer below, then watch Questlove and Black Thought freestyle an entertaining promo. Afterwards, visit the Roots Picnic website for the full artist line-up and additional details. Tickets go on sale this Friday, June 10th, but if you're savvy and can't wait that long, you might be able to find yourself a presale code (via Brooklyn Vegan or possibly floating around in the comments section of Okayplayer). If you can't make it to NYC this fall, you can catch The Roots in August at Summer Spirit Festival or Richmond Jazz Festival. And be sure to tune in to the 2016 BET Awards later this month, where they'll take part in a special tribute to Prince. 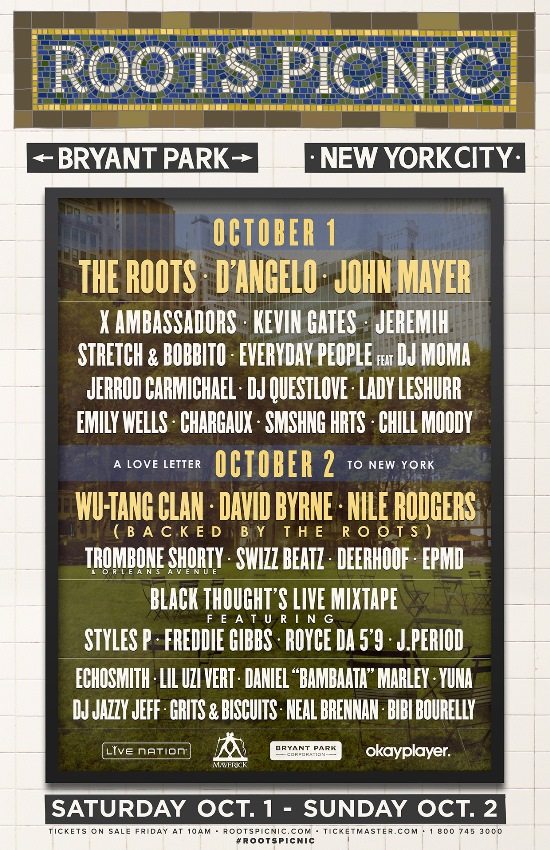