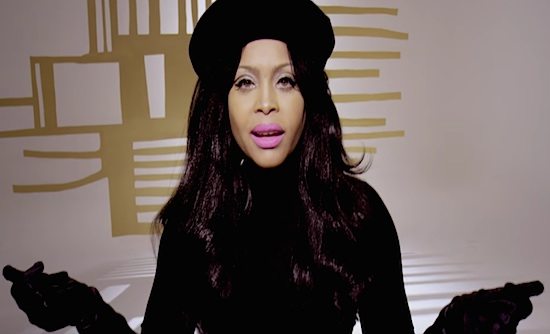 Housing the most pivotal moments of the civil rights movement, hippies, sexual liberation, the assassination of a sitting president and the beginnings of the Vietnam War, the 1960s were indeed an interesting time. They were also a time that saw acts of many musical genres appear on programs like The Ed Sullivan Show while performing in front of stylized backdrops. Though a child of the '70s herself, Erykah Badu taps those performances during the turbulent '60s as inspiration for the video for "Maiysha (So Long)," the track she's featured on from the Robert Glasper and Miles Davis project Everything's Beautiful.

Erykah takes on the role of Sarah Bellam, a temperamental jazz singer/beatnik who's a bit much to handle. Unfortunately tasked with reeling her and her wackiness in is her bandleader, Roberto Glasper (do we really need to tell you that he's played by Robert Glasper?), who's been driven to drink by her antics on and off stage. Roberto happens to get Sarah under control long enough to get her on stage, where she swings so cool and sways so gentle to the bossa nova stylings of the song. She's also suddenly joined by the rest of the band, including harmonicist Frédéric Yonnet, who steps in to play Miles' iconic horn solo. As soon as the performance is over, though, it's back to the same ol' ish, as Sarah throws an expletive-filled tantrum that would make Azealia Banks blush. All in all, it's the kind of quirky, funny video that we've come to expect from Miss E. Badu.

Check out the creative visual below and pick up Everything's Beautiful, which is in stores now.


TAGS:  erykah badu, Frederic Yonnet", miles davis", robert glasper
Previous: Ro James Throws The Party Of The Year In ‘Already Knew That’ Next: Anybody ‘Can See’ That This New Lisa Shaw & Miguel Migs Tune Is Hot