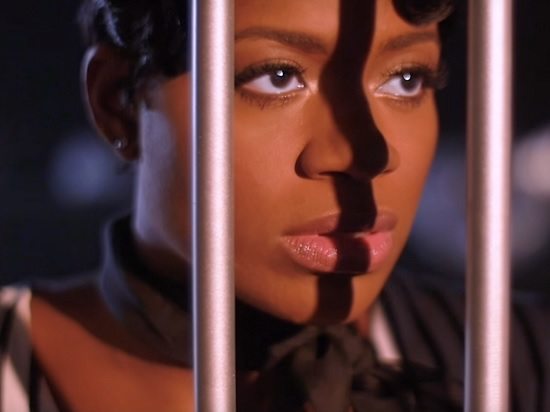 Though the BET Awards were the musical talk of the town on Sunday, they most certainly weren't the only thing going down in the music world. Many of the stars in attendance used their time in the spotlight and on the red carpet to promote their own material, including a few who peppered in surprises and premieres all their own. One such star was Fantasia, whose upcoming album The Definition Of... is set to arrive next month. In the midst of discussing what she was wearing and the performances she was looking forward to, Fanny took the time to also drop off the world premiere of her video for the sultry "Sleeping With The One I Love," a scandalous song about sleeping with Mr. Right while being married to Mr. Wrong.

Instead of going the conventional route for the clip, Fanny teamed up with famed director/photographer Derek Blanks to create a short prison drama in which Fantasia plays four distinct women — Paulletta, Sharon, Rox and herself — who have landed in the slammer for their indiscretions. Much like Chicago, which obviously inspired the aesthetic of the clip (especially the "Cell Block Tango" scene), they're left under the care of a guard who is known for keeping the public safe but is actually a menace to the women he's charged to watch over. Of course the ladies aren't going to take this kind of treatment lying down. They also aren't going to just sit around in cells and not look fabulous, with Fanny donning a variety of hairstyles and black-and-white looks, culminating in a dance sequence in which each character is dressed in different black, sexy get-ups. Eventually, a plan is hatched between the ladies to get their revenge on the ne'er do well guard, but does it succeed? You'll have to watch below to find out.

The Definition Of... will arrive in stores on July 29th.

t
Previous: Morning Soul: Maybe You Might Be More Than Just A One-Night Lady Next: Rihanna Swings Her ‘Sledgehammer’ For ‘Star Trek Beyond’