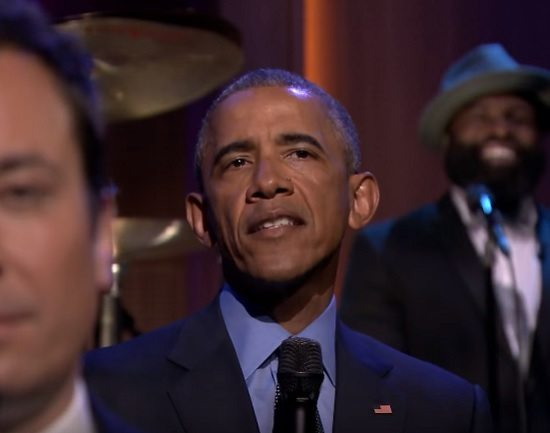 There will be many things we'll miss once President Barack Obama's final term is up. Seriously, when will we get another president to freestyle alongside the cast of Hamilton? Or a first lady who has everybody from Ledisi to Michael Jackson to Chubb Rock on her workout playlist? While we'll definitely miss things like that, perhaps what we'll miss the most is the chance to see Obama pop up on The Tonight Show Starring Jimmy Fallon to slow jam the news. Though all of the previous segments have been memorable, this one has the distinction of being Obama's final run as a sitting president. And boy did he go out with a bang.

For his last go-round, everybody from Steph Curry to Beyoncé got name dropped, with Fallon hilariously referring to the prez as "Baracky with the good hair." He also drops some political stats, boasting about bringing the unemployment rate down to under 5% and the Affordable Care Act. At one point, Black Thought breaks out into a rendition of Rihanna's "Work" and Obama doesn't miss a beat as he bops along in the foreground. Through all of this, he somehow manages to keep a straight face, a feat that neither Fallon or Black Thought were able to accomplish. It was hysterical as usual, but also a stark reminder that we'll probably never see another president like this in our lifetime. What a time to be alive, ya'll.