Ro James Takes Us On A Soulful Road To ‘ELDORADO’ 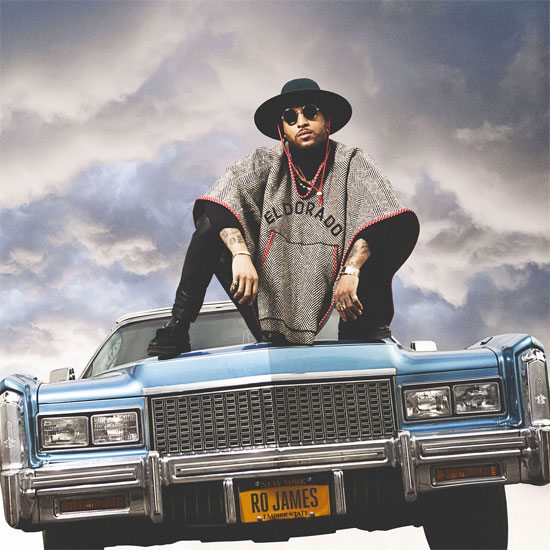 In the wake of Prince’s passing, there is a notable void left unfillable to many of his fans. However, his legacy and influence are tangible thanks to the works of a slew of young, soulful male acts ranging from Miguel, dvsn, Roman GianArthur and, most recently, Ro James.

After co-writing “Use Me” from Miguel’s 2012 Kaleidoscope Dream, Ro decided to embark on a career as a solo artist. In 2013, he dropped a three-part EP series, Coke, Jack and Cadillacs. It wasn't until Ro’s late-2015 single, “Permission,” that he really broke out from the pack with the song's bedroom-ready sex appeal.

While “Permission” is notably a different feel than the body of work itself, it serves as a wonderful introduction to the smooth vocal stylings that Ro James' debut album ELDORADO offers. Symbolically, recurring themes of smoking and love-making are prevalent throughout the work. (See: "Permission," "Burn Slow," "Ga$," "New Religion," "A.D.I.D.A.S.," and "Last Cigarette.") Ro showcases his songwriting skills as these themes are cleverly woven throughout the tapestry of the album. Sonically, the soul pot is overflowing with production featuring elements from rock, country, R&B, hip-hop and funk. Although the instrumentation is heavily-infused, the outcome is somehow light and airy. This is perhaps most telling of his upbringing. Ro was born in Germany but raised in Hawaii, Oklahoma, Indiana, California and Illinois. It’s no wonder that his music is as eclectic as his military brat past.

When asked about his influences, Ro's list is equally as eclectic, listing Prince, Stevie Wonder, Otis Redding, David Bowie and Johnny Cash. On Prince, Ro reflected with Billboard earlier this year, saying, “Rebellion [influenced me]. With Prince, it was just his artistry. His ability to be himself and not really care what no one else thought. I appreciate that. With Purple Rain, I was like, ‘This shit is great. I can do that. I want to make people feel like that.’"

This album has a definite gritty soul to it. If “Permission” is an ode to the male falsetto, then “Already Knew That” is the mid-tempo track that showcases Ro’s interpretation of the current trap soul trend. Standout tracks are “Burn Slow,” “New Religion” and “Holy Water,” with the latter of these eloquently showing the fuller range of Ro’s vocal ability. And just when he’s screamed, loved and cooed his way through a full range of emotions, Ro smoothes it all out with the harmonious “Eldorado” to end the set.

Take a trip to ELDORADO with Ro James, and you may be surprised at what you discover there. Speaking of trips, Ro is booked all summer long, touring with both Erykah Badu and Maxwell. Check him out on Maxwell's SUMMERS' Tour coming to a city near you starting June 18th.


TAGS:  david bowie, dvsn, erykah badu, johnny cash, maxwell, miguel, otis redding", prince, Ro James, Roman GianArthur, stevie wonder
Previous: After 7 Shows Us How To Work It All Out With ‘Let Me Know’ Next: Jazmine Sullivan Decides To ‘#STEPFORWARD’ With Reebok & Bkstg To Tell Her Story