Summer Music Festival Season Is Here! Get Ready To Hit The Road In The 2016 Kia Sorento SXL V6 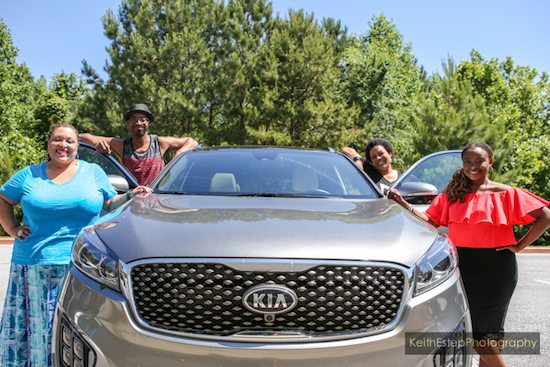 Memorial Day weekend is the unofficial kickoff to summer, so what better time than to take a road trip. Team SoulBounce did just that and headed to Atlanta, Georgia for the 2nd Annual ATL Soul Life Music Festival in a 2016 Kia Sorento SXL V6 courtesy of DriveShop.

Our fully-loaded 2016 Kia Sorento SXL V6 in Titanium Silver was a fabulous travel companion. We hit I-495 heading out of Maryland, toward 95 South, winding our way straight down I-85 through Virginia, North Carolina, South Carolina and on into Georgia. If you know Team SoulBounce, the artists performing over the weekend at the 2nd Annual ATL Soul Life Music Festival were in heavy rotation on the entire drive. The user-friendly touch screen and infotainment system in the Sorento made connecting to our Spotify playlists and going back and forth between our favorite SiriusXM stations a breeze. The Infinity surround sound system gave us more Soulbounce to the ounce.

The spacious front and rear seating areas with ample storage in the back (when the third row of seats was down) made for a relatively comfortable drive and easy hauling of luggage, chairs and coolers. The steering, handling and security features, such as the lane departure warning system and surround view monitor (literally, a bird’s eye view of the vehicle), made the ride smooth and uneventful in the best possible way. The most surprising and exciting feature was the panoramic sunroof. Ever ride in the observation car on Amtrak? Yeah, it was like that.

Three USB ports (two of them lightening chargers), three 12-Volt power outlets and a 110-Volt power inverter kept all of our phones and equipment charged for hours of photo and video sharing via Twitter, Facebook, Instagram and Snapchat all weekend long. We slipped back to the car in between performances by Syleena Johnson, Anthony David, Eric Roberson, Robert Glasper Experiment, Lalah Hathaway, Rahsaan Patterson, Goapele, Avery*Sunshine, Angie Stone and Kindred the Family Soul to not only recharge our mobile devices but ourselves in the air-conditioned comfort of this fly whip.

Our trek to Atlanta in the 2016 Kia Sorento SXL V6 to the 2nd Annual ATL Soul Life Music Festival was a world-class driving experience. The Kia Sorento can roll with Team SoulBounce whenever and wherever we chase good music.