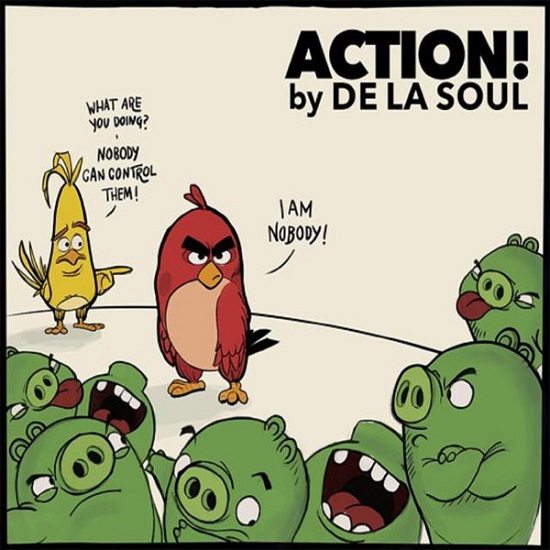 Admittedly, when we think of Rovio's popular mobile game Angry Birds, De La Soul doesn't come to mind. Though our minds couldn't think of the combination, someone's did and we have a jammin' new single from the plugs because of it. The Daisy Age trio got together to contribute a brand new song for the latest installment of the game, Angry Birds Action!, with their newest offering, "Action!"

The track is undeniably funky, with the wall-to-wall bump of 808s greeting you from the beginning of the song, which is soon joined by a sticky bass line. The killer combination, along with a space-age sounding chorus, will have you thinking about the rap crew's '90s heyday, as this track is crafted to make you move. Equally impressive are the group's flows, which are still sharp as ever despite us being nearly 30 years out from the release of their debut album 3 Feet High and Rising.

Unlike recent single "Pain," "Action!" won't be featured on De La Soul's new album, though it will be available in the Angry Birds mobile app as part of its Big Pig update. But if you don't want to download the app to hear some new De La, you can stream the track via Spotify right here and pick up the single from iTunes. As well, you can pre-order De La's upcoming album And The Anonymous Nobody..., when it arrives in stores on August 26th.