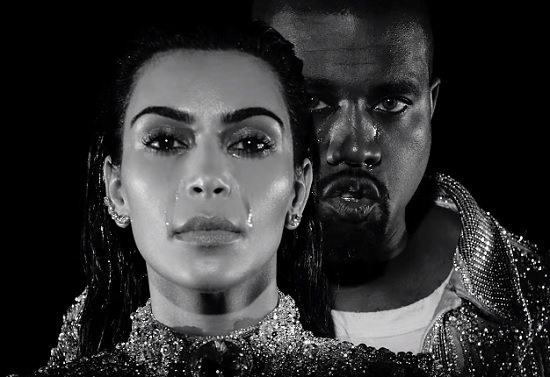 Kanye West's love affair with fashion is by now no secret. Not only does he have his own clothing line and perhaps one of the fastest-selling shoe lines in the game, but he's also a big fan of many of the large fashion houses. In fact, he's so enamored with one house in particular, Balmain, that he tapped them to help him create the latest visual release for The Life Of Pablo track "Wolves."

The stylish black-and-white clip features more than a few memorable faces from the runway, including Joan Smalls, Jourdan Dunn and Cindy Crawford, stomping back and forth in front of the camera in their finest Balmain looks. Among the sea of fierces stands Kanye and wifey Kim Kardashian, rocking Balmain looks that might look familiar, seeing as they rocked them as they rocked similar duds at this year's Met Ball. The other accessory everyone's wearing: tears. They adorn each beautiful face we see, streaming down the cheeks of glitterati and shining like the elaborate beaded numbers they wear. Amid all this haute couture hullabaloo, we also get pics at the song's co-collaborators Vic Mensa and Sia, who each appear long enough to sing their piece and then get lost amongst the shuffle.

Admittedly, we're not exactly sure what all is going on here, but we must say that it all looks pretty damn fabulous. Check out the entire seven-minute clip below.


TAGS:  Joan Smalls, Jourdan Dunn, kanye west, kim kardashian, Sia, Vic Mensa
Previous: Knox Brown & Anderson .Paak Hope To Inspire The Masses On ‘No Slaves’ Next: Cori B. Wants To Hang Out Instead Of ‘Sittin’ In’ Her ‘Room’