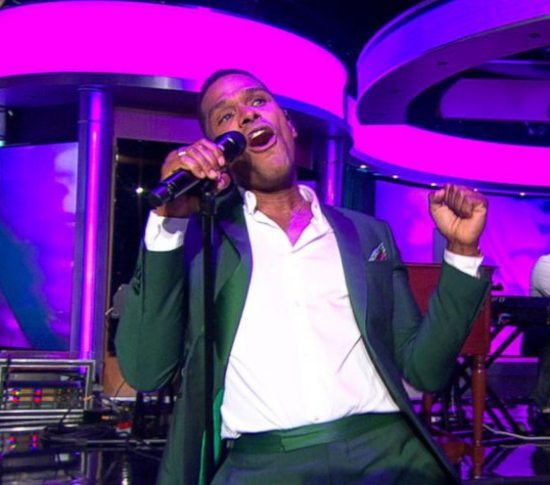 Maxwell has been making serious TV rounds as of late in support of his recently released blackSUMMERS'night. So much so that it's kinda hard to keep up with him. This past Thursday, the crooner made his way to New York City and stopped into the studios for ABC's Good Morning America for a performance of his latest single, "Lake By the Ocean," and some friendly banter with GMA co-host Robin Roberts.

Decked out in a fly emerald green suit and white shirt (with the collar popped open enough for the ladies in the audience to get hot and bothered), Max worked it out with a slightly different arrangement of the song that was heavier on the bass in the verses. The change gave him more than enough energy to get through the early morning show as he was all smiles, constantly shouting "Good morning, America!" throughout the performance and dancing, twirling and hopping during the song's bridge. We'll take a double of whatever it is that gives him that kinda energy at the time of day. All in all, it was another fine performance of the song that gave the audience a taste of what to expect from Max during his SUMMERS' Tour, which is currently on the road.