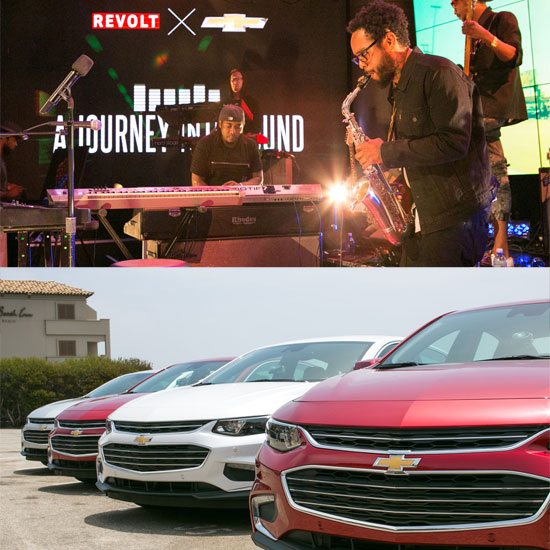 "This is a journey into sound" isn't simply the quote that opens Eric B. & Rakim's hip hop classic "Paid In Full," but it's what SoulBounce was recently invited to embark on with Chevrolet and REVOLT. The U.S. auto manufacturer and Sean Combs' cable television network collaborated on A Journey Into Sound, a multi-part experience that took selected media and music influencers to various locations around Southern California in the 2016 Chevrolet Malibu Hybrid. The experience featured conversations about music and culture along the way and ended at the REVOLT Studios in Los Angeles with a live performance by musician, producer, bandleader, GRAMMY winner and SoulBounce fave Terrace Martin.

Our journey began in Santa Barbara, where we met up with a few of the other tastemakers who flew into town and were given the keys to a shiny new 2016 Chevy Malibu Hybrid. We were introduced to all of the car's cool features including 4G LTE Wi-Fi, OnStar, Chevrolet MyLink, Apple CarPlay, Android Auto and the Bose premium sound system, which we quickly tuned to SiriusXM's FLY. Fresh from a cross-country plane ride, we took another ride along the scenic Pacific Coast Highway to Carpinteria, California for our first stop at Rose Lane Studio. At the boutique recording studio, we were given a personalized tour of the state-of-the-art facility by owner Sjoerd Koppert and met most of the Rose Lane staff, including producer Damion "Damizza" Young who regaled us with hilarious stories of his days in radio and the music industry.

We hated to leave Damizza and his many tales behind, but we said goodbye to the good folks at Rose Lane Studio and continued on our journey to Malibu, where we'd be staying overnight. Yes, we drove a Malibu to Malibu, which was super cool along with the fact that the vehicle's fuel gauge barely budged from a full tank despite having driven almost 100 miles. We arrived at our next destination, the Malibu Beach Inn, and checked into the posh accommodations. Our luxurious beachfront room overlooked the Pacific Ocean and after a quick selfie photo shoot all around the room and on the balcony, it was time to get ready for the night's activities at nearby Nobu Malibu.