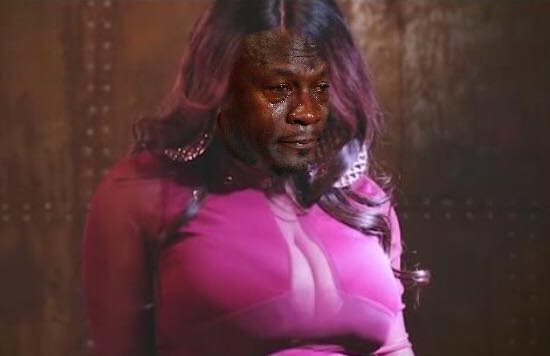 Unless you’ve been hiding under a rock or just trying to stay sucker free, there’s a good chance you’ve seen Countess Vaughn’s music video for her single, “Wifey (Do You Love Him).” The former child prodigy and current reality star on TV One’s Hollywood Divas apparently has dreams of not only returning to the silver screen but taking another shot at the music game. The actress actually had a recording contract in the early ‘90s, but failed to catch on. Now that she’s good and grown, ol' girl wants to try again. Unfortunately, we wish it wasn’t like this. Stupefied by this horrendous spectacle, we aren’t sure whether to laugh, cry or pray.

Directed by Vaughn’s Hollywood Divas co-star Lisa Wu, the video is a sordid tale of sex, lies and sister-girl screw faces. Countess’ BFF catches her boo thang, played by actor Jensen Atwood, taking some skinny light skinted heifer (because who else is going to play the other woman...sigh) into a restaurant. She calls up Countess to let her know that her man ain’t right and they start plotting like Kim and Cookie. Decked out in hairpieces courtesy of Zendaya’s wig crypt, Farrah Franklin’s unused jumpsuit from the “Independent Women, Pt. 1” video and Cookie Lyon’s lingerie from that very special family dinner on Empire, Countess lets her man and these hoes know she ain’t the one.

The actual song sounds like a reinterpretation of Missy Elliott’s “All N My Grill.” While the beat is serviceable, Countess’ vocals aren’t quite up to par. Her husky tenor sounds like she’s trying to get over a nasty bout with pneumonia and her neti pot couldn’t seem to get hot enough. Being the MacGyver that she is, Ms. Vaughn decided to smoke a couple packs of Newports, unfiltered. Of course, when you’re working with lyrics like, “How about never, never, ever, ever / Will you get my man, You think you’re the s**t / Well I’m the big s**t / Don’t you understand,” that may very well be the sound she was going for.

The whole affair is kind of heartbreaking. Like watching your favorite black actress from an old prime time show forced to slum it out on a bad cable TV movie starring a bunch of comedians you only remember from Comic View. We know that Countess Vaughn can blow. She’s proven it time and time again, from her performances as a little girl on Star Search, to that time she got Usher together on Sinbad’s ill-fated talk show to that time she was doing a little too good of an impression of Jill Scott. We know she can act, as we’ve watched her grow up on TV, from little Olivia on 227 into Kimberly Ann Parker on Moesha. The whole thing is just bewildering. In fact, we want to fight everyone involved in this production. Except Lisa Wu. She knows karate.

After the video hit the net, it was no holds barred as our cousins and ‘nem clowned the clip as a low budget mess. Of course, if you’ve ever watched Lisa Wu on a reality TV show, you know she’s not going to sit back and take anyone talking about her work. The serial entrepreneur defended the video, stating that the clip on the net was an early version and that she literally had no budget and would like to challenge anyone else to do the same.

Just check Countess’ video for her slept on but critically acclaimed song "Wait For Me" for the receipts, Lisa! In the early ‘90s clip, Countess was making magic with what accumulates to less than $0.48 a day. Ever the professional, she gave us Karyn White Hollywood glamour and Clarissa Explains It All realness. The more you watch the clip, the more you realize Countess was ahead of her time. There were many things that would be used elsewhere in ‘90s in music and film, such as the pajamas from TLC’s “Creep” video, the flower petals from American Beauty, an early prototype of Outkast’s logo, Martha Wayne’s pearls, it’s all there! A trendsetter, tastemaker, the world was clearly not ready for Ms. Vaughn.

And clearly we’re still not ready.

While the Lisa Wu edited version is slightly better, with more flattering looks for Countess, the storyline and much of the action remains the same. What’s the point in just being kinda bad? If you’re going to engage in some fooleywang nonsense, make sure your fooley and your wang is on 10 at all times. That’s probably why Countess was so animated and extra. As a veteran of TV, film, music and stage, her spidey-sense probably alerted her that she was in the midst of some wild hot bulls**t. Instead of trying to save face and potentially bore her audience, she digressed to at least leave us with some meme-worthy material. God bless her and her ministry.