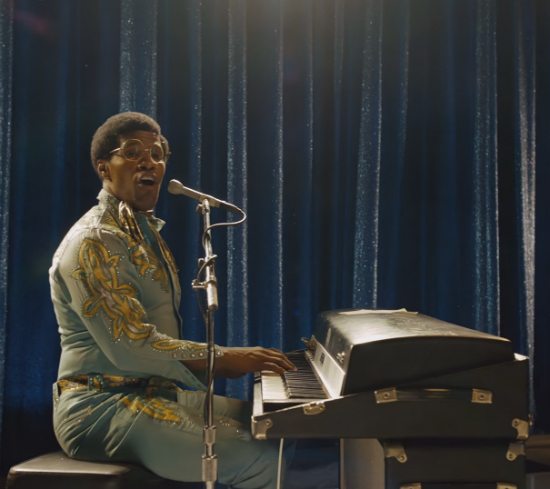 Jamie Foxx is flexing his character actor muscles yet again in his latest commercial from Verizon. Debuted during the majority un-funny 2016 MTV Video Music Awards, the new ad was definitely a breath of fresh air. Unlike his last Verizon ad, where he played old man Past, this time Jamie is getting his country and '70s swag on as Ryan Stoan Cowboy. Get it? Like Glenn Campbell's "Rhinestone Cowboy" because phonics are fun.

Sitting at his keyboard, Jamie, or Ryan rather, is decked out in a teal green get-up complete with shimmery gold and rhinestone trimmings and huge round glasses to match. He sings "Oh girl just call me / Get yourself together / 'Cause on Verizon / The best network just got better/ On Verizon."  The lyrics are catchy, but things get ridiculous when he repeatedly sings "On Verizon" in a foolish falsetto, later dropping the mic like Randy Watson.

Verizon has been touting itself as the next gen network, and they've gotten our attention with their recent ad spots. Even SoulBounce fave Anthony Hamilton thought Jamie's shenanigans were hilarious in a recent tweet. If you feel like you want to explore a better network, check out Verizon's website and get yourself together like Jamie/Ryan said. Check out more commercials featuring Jamie Foxx on Verizon's Facebook page and watch Jamie as Ryan Stoan Cowboy right here.