The Roots’ Partnership With Stella Artois Is A ‘Bittersweet’ Experience 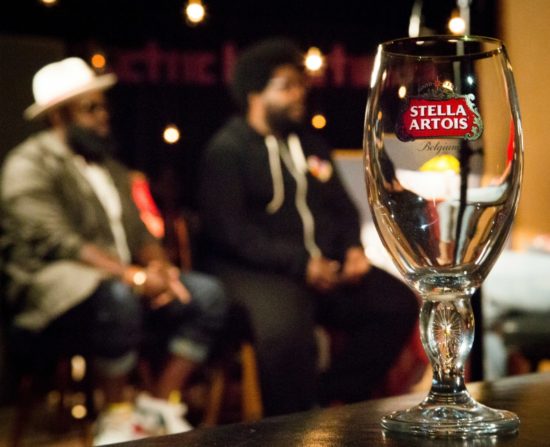 Whether it's revamping a 90's groove for Target or composing a triumphant anthem for this year's NBA Finals, The Roots have a knack for parlaying unique corporate partnerships into break-ya-neck jams that leave us thirsting for more. Well, it looks like their latest collaboration with Belgian brewmaster Stella Artois is just the sonic quencher we needed, providing us with two satisfying mixes for "Bittersweet."

This is the Legendary Roots Crew, so it's no surprise that this joint is straight fiyah as frenetic rhymes, booming drums and symphonic horns collide with magnetic force. In addition to serving as a soundtrack for the beer-maker's "Host One to Remember" campaign, the two-sided track boasts an aural peculiarity that sets it apart from anything else the Philly-based collective has ever done.

As explained via press release, "The Roots experimented with different pitches, instruments and music styles to create this original, multi-sensorial song that stimulates the ears and the taste buds, based on the research of Professor Charles Spence of the University of Oxford. Professor Spence found that there are surprising connections between the senses (hearing, vision, touch, taste and smell) – when one sense is stimulated, it triggers an effect on the remaining four senses. These unique findings from this new field of research, known as "crossmodal correspondences," inspired the band to produce two versions of "Bittersweet" to complement the various flavors in Stella Artois – one high-pitched version that triggers the enhancement of the lager's sweet, fruity notes and one low-pitched version that enhances the bitter notes."

Black Thought elaborates in a recent Billboard interview, saying "The idea of senses kind of being correlated is something that I’ve always suspected and the theory was proven to us weeks ago. It’s dope." Questlove adds, "To discover that all your senses are effective, not just one in particular like your ears or your eyes, but all of your senses, this is really right up our alley. This is how we create music."

A video for the scientifically-enhanced banger is slated for release later this month. In the meantime, feel free to pour yourself a cold one and do your own sensory experiment while listening to both versions of "Bittersweet" below. The Roots will be on hand to perform the twofer for the opening night (August 17th) of "Le Savoir," a multi-sensorial dinner theater experience hosted by Stella Artois in New York City. But, if you can't snag a ticket for the one-of-a-kind event, there are other opportunities to jam with the Illadelphians including Summer Spirit Festival, Richmond Jazz Festival and NYC's inaugural Roots Picnic event.


TAGS:  audio, black thought", Charles Spence, questlove, Stella Artois, the roots
Previous: Miguel Reveals His Creative Process In NPR Music Documentary ‘Noteworthy’ Next: Miguel Wants To Get Down With You In His ‘Cadillac’