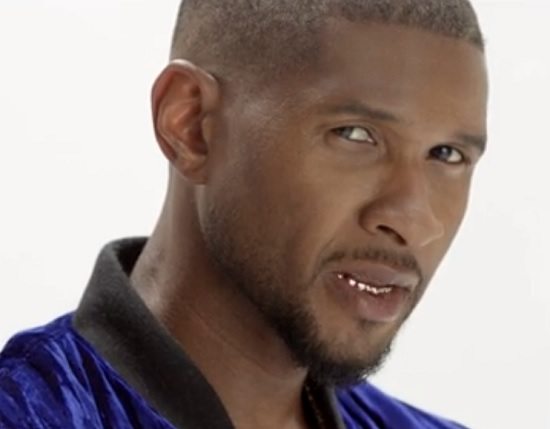 Usher and Young Thug were pretty clever wen they got together to use Master P's glory days as thinly veiled innuendo for getting it on on Ursh's recent single "No Limit." However, the performance of the track on this summer's BET Awards, while good, left us feeling slightly underwhelmed. Ursh aims to make up for that with his brand new visual for the track, and he does so with a little help from his friends.

"No Limit" features Usher, draped in a blue velvet jacket and sporting a bottom grill, and Young Thug, who's wearing a serape creation that we'll let you decide on, standing against a stark white backdrop. The singer tries his best to look thuggish (or as thuggish as one can look while busting eight-counts with a group of dancers moving in unison behind you) as he sings about giving you "that ghetto D." Usher doesn't just rely on aping for the camera to up his street cred, though, leaning on Young Thug and extra special guests Gucci Mane and Ty Dolla Sign to validate his hood pass.

Of course, since Ursh is #TeamTIDAL, "No Limit" is a TIDAL exclusive. If you're a subscriber to the service, you can watch the video in full below. If not, you'll only get a 30-second preview.