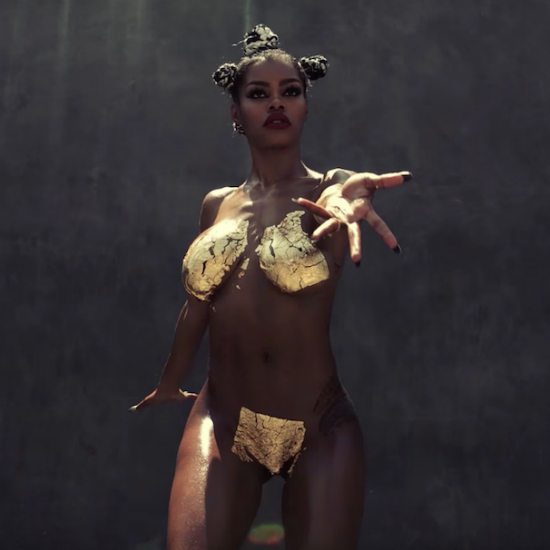 Teyana Taylor and her super-fit body seem to be the gift that keeps on giving and this time she's wrapped it in gold. The multi-talented performer just released a mean freestyle to Kanye West's Cruel Winter cut "Champions," and she's made it her own along with the gold-dipped visuals. She purrs over the track, singing, "Anna Wintour need a chair to see how they stare with the bangs and hair for me / It's like they ain't care for me, soul's life is a spare for me." Later in the track, she also reminds us, "I've been getting money where the hell you been now / No album out and somehow I was getting paid out."

The video, which is entirely created from photos shot by Sasha Samsonova, features Teyana strategically painted with nothing but gold leaf. She poses to the music in the stop-motion flick, which gives the beautiful illusion she's performing in real-time. Teyana showcases the warrior within her as she brandishes heavy artillery in the middle of a concrete jungle. Who else can rock a ski mask, two gold AK47's and glitter in gold all at the same time?

While we've been riding with Teyana for a while now, the songstress has stayed on the public's mind since she appeared in Kanye's video for "Fade," which debuted during the 2016 MTV Video Music Awards . If you need a beautiful reminder on why you need to keep your eyes and ears locked on Teyana, check out her "Champions" freestyle video right here.