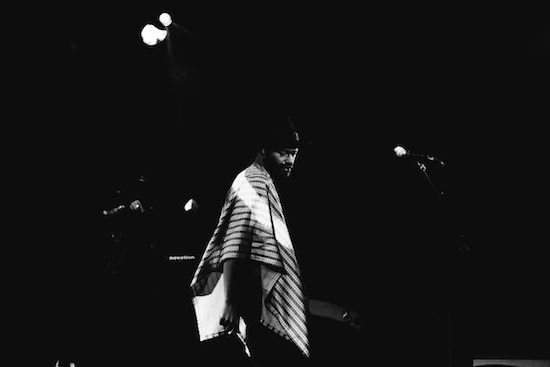 Earlier this year, we could barely contain our excitement when we heard that Electric Wire Hustle might be dropping a new album. Who could blame us after they wowed us last year with their delicious EP Aeons? Well, our prayers have been answered with the news that the New Zealand-based outfit will, in fact, be releasing their third studio album, The 11th Sky, on September 30th. And what better way to announce a new project than with hot new single "Go Slow" and a teaser for the album?

For the album's first single, EWH present a slow burn of a jam. Both dense and seductive, "Go Slow" allows frontman Mara TK the room to stretch and make himself at home. His vocals burn with barely-contained restraint. The song first began to take shape after Mara TK sat in the studio with mega-producer Just Blaze at his Harlem studio. "Him and Young Guru had made the most amazing midi library by sampling keyboard after keyboard, playing it all themselves. He wrote his parts with what are absolutely real instruments, but using midi so that everything is changeable at any point," Mara said. Inspired, he headed back home to New Zealand and, after receiving several demos from local producer James Duncan, Mara hopped on the track that would come to be known as "Go Slow."

Based on the album's teaser trailer, there's much more of EWH's signature otherworldly sound to be found when The 11th Sky drops in a few weeks. With eerie, sparse scenery as the backdrop, fans are treated to snippets of six songs from the album. It kicks off with "I Light A Candle," an uptempo dance tune that finds Mara belting out a line that should be familiar to Stevie Wonder fans before fading into a trippy visual for "Go Slow." "Troublemakers," "The Border" and "Red Window" follow, each with their own distinctly haunting and psychedelic vibe.

Dive in to Electric Wire Hustle's steamy "Go Slow" and then whet your appetite for more by feasting on their video teaser. Also, be sure to pre-order your copy of The 11th Sky on iTunes or Bandcamp before it hits stores on September 30th via Bastard Jazz Recordings.