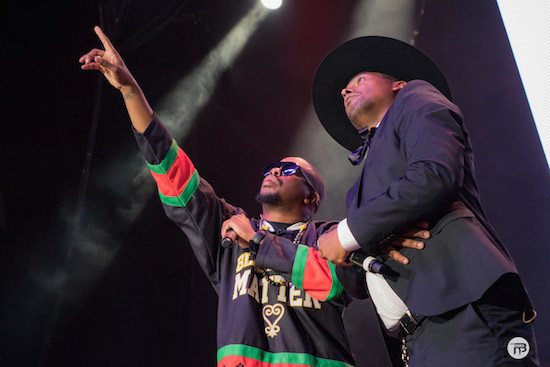 A highly anticipated reunion for some and a new musical experience for others, GRAMMY-nominated singer Raheem DeVaughn and poet/singer Wes Felton have come back together as the duo The CrossRhodes and returned to bless the music scene again with their new single “Footprints On the Moon.”

Formed in 2001 after being longtime collaborators of the DMV neo-soul showcase Groove Gumbo, The CrossRhodes were known for their jazz-inspired tracks perfectly blended with DeVaughn’s smooth voice and Felton’s spoken word lyricism. The pair last collaborated on the track "Admit It" in 2007, and now almost a decade later they are readying a new album, also titled Footprints On the Moon.

In classic The CrossRhodes fashion, the album's title track is a socially conscious single that compels the listener to stand firmly in their history and truth while questioning all that society has ascribed their lives to be. The song opens with a reminder from DeVaughn, “We deserve the world, my Negus / See the world is yours, my Negus / See it’s never to soon, my Negus / For footprints on the moon, my Negus,” that also serves as the chorus throughout. Felton comes in firmly challenging us, “Don't settle for the city, or the block, or the streets,” and to shake off the stale narratives of oppression and marginalization.

“Footprints On the Moon” is politically and socially charged, perfectly reflecting the conscious awakening currently happening across the United States. This track has potential to become an anthem and is as an impressive return for The CrossRhodes. Do as the song’s closing sample commands and “Free your mind and vibrate higher!” and plan to pick up the album Footprints On the Moon this fall.