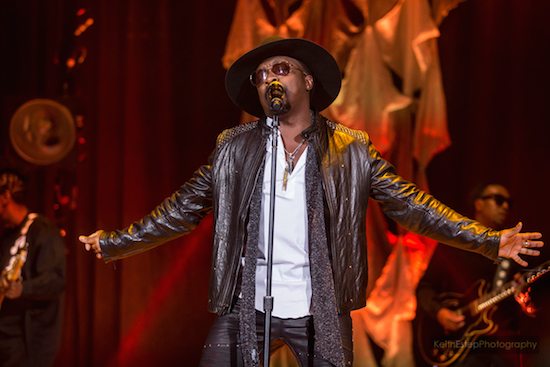 When we first got wind of the What I'm Feelin' Tour, we knew it would be something special. How could it not be with Eric Benét, Lalah Hathaway and Anthony Hamilton coming together like a soulful Voltron -- a Soultron, if you will -- on the same bill? This lineup of soul and R&B all-stars didn't disappoint when the show came to Washington, D.C. on Saturday, October 8th to DAR Constitution Hall.

After phenomenal performances from Benét and Hathaway, it was time for headliner Hamilton to show and prove, which he did with aplomb. This was Anthony's second major tour to hit the DMV area in 2016, having performed here this past spring with Fantasia. Their co-headlining tour, hot on the heels of the release of What I'm Feelin', found AHam performing in a leg brace but still putting on a good show despite lacking full mobility. This time around, however, Anthony was fully healed and he hit his stride.

The band began playing a '70s Blaxploitation-sounding track to kick the show off, and The Hamiltones got in formation to sing "Stone Cold." Anthony soon strode onstage to join everyone to sing one of his contributions to the American Gangster soundtrack. The throwback vibes kept flowing with a funked up arrangement of "Sista Big Bones" that gave his praise song about curvy girls more bounce to the ounce. Next came the crowd favorite "Cool" that had people on their feet and singing along to their jam. Hamilton kept folks outta their seats with current hit "Amen," which started off as normal before the band switched it up with a trap remix that could best be described as "lit."

No sooner than he heated things up, Anthony Hamilton made it even hotter with his slow jams, starting with "Do You Feel Me," also from the American Gangster soundtrack. He soon had people in their feelings with "What I'm Feelin'," which put The Hamiltones' harmonies on full display. Soon the familiar chords of "The Point of it All" began to play, and Anthony had all the couples and single ladies swooning to his crooning. When AHam and The Hamiltones interpolated Prince's "Adore" into the mix, it became a tantalizing yet touching tribute.

Anthony had worked-up fans fanning themselves while he slipped offstage to change out of his own sweat-drenched clothes. He left everyone in The Hamiltones' capable hands, and they treated concertgoers to their original song, "Never Gonna Let You Go." The soulful, two-stepping groove was catchy with fun lyrics like, "You be the sugar, I'll be the zaddy." It's safe to say that when the fellas release this song, they have a hit on their hands.

Hamilton came back onstage so fresh and so clean with a new outfit on, and he kept folks dancing in the aisles to the steppers' favorite "Best of Me." He brought the festive mood down with What I'm Feelin' cut "Walk In My Shoes" where he bared his soul and sang his truth. He continued in that personal vein with The Point of it All's "Her Heart" before reaching back even further to the searing soul of "Can't Let Go" from Ain't Nobody Worryin'. AHam put out an APB for "Charlene," and had many women in attendance ready to change their name. Anthony Hamilton smoothly moved from being lovesick to being "So In Love" to end his show with the joyful jam.

Although there were a few songs missing from his set that we would have loved to have heard live this go round (from his first single "Comin' From Where I'm From" to his current single "Ever Seen Heaven"), Anthony Hamilton put on an excellent show ranking high amongst our favorite concerts of his -- and we've seen him a lot. As a matter of fact, the What I'm Feelin' Tour was so nice we had to go back twice, seeing the concert in both D.C. on this night and Baltimore the next. We highly recommend experiencing this show for yourself to feel a gamut of emotions and soak up all the good musical vibes. The What I'm Feelin' Tour runs through Sunday, October 30th when it ends in Richmond, Virginia.