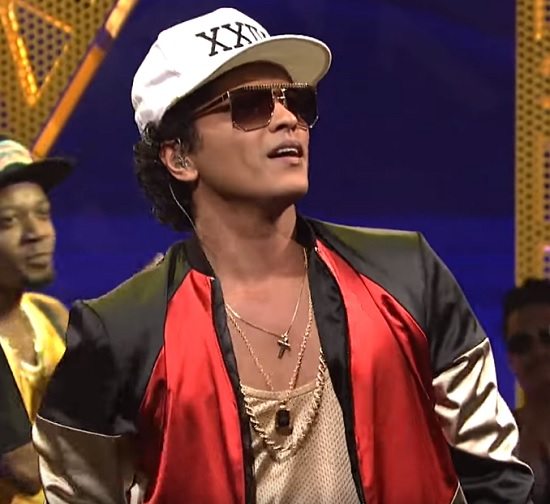 If you're like us, you've been playing the hell out of Bruno Mars' latest single, "24K Magic." The pimp-tastic, boastful joint has jam of the fall written all over it and will definitely be present on many a playlist. However, as we witnessed after his takeover of not one but two Super Bowls, while Bruno is great on record, he's even more amazing live. He proved it once again over the weekend when he made his third appearance on the Saturday Night Live stage to perform his upcoming album's title track and brand new jam "Chunky."

He started things off with "24K Magic" as he and his hooligans, dressed in jerseys and windbreakers, took the show from his dressing room to the audience and eventually to the stage. From there, he and the band continued putting on quite the show while cutting a few smooth dance steps to keep the party going.

But the real moment came when Bruno debuted brand new song "Chunky" for his second set of the night. Like "24K Magic," "Chunky" throws back to early '80s funk, this time channeling Slave's take on the genre. Two female singers joined the crew for the number as Bruno sang about meeting a fine number at the club and eventually sliding with her from the bar to the car. The call-and-response feel of the jam made it all the more fun and us even more ready to get our hands on Bruno's latest when it hits stores this November.

Check out Bruno once again doing the damn thing on the SNL stage when you press play for both performances below.


TAGS:  bruno mars", slave
Previous: Morning Soul: Beautiful Girls All Over The World Next: Chill With Arima Ederra In Her ‘Garden’