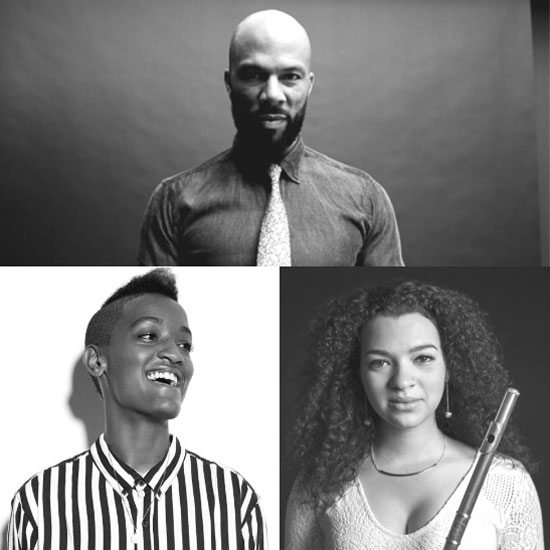 Common is rolling out single after single ahead of his new album Black America Again. While he's delivered a handful of politically charged loosies to get you riled up, now he wants you to simmer on down in the sultry single "Red Wine." The conscious rapper enlists the help of The Internet's frontwoman Syd tha Kid and singer Elena Pinderhughes, who also plays flute on a few tracks from the upcoming album.

With soothing instrumentals anchored by strings, Syd opens the love drunk track, singing, "Red wine time on the couch / Happy you agreed to hang out / Keep my head in the clouds / Keep them old names out your mouth." Common follows up at the two-minute mark with his infectious rhymes that are as clever as ever, "Used to be a hooper, now I'm a hoper / Thoughts I bring to life like an ultrasound / I'm bound to the underground." And later Elena brings it all together with her sweet vocals in verse three, singing, "We go together like so / Let's make a toast / That we both can make the most of this time / Red wine." The instructions in the chorus are clear. "Get comfortable," the ladies sing as the music reinforces the call to action.

Black America Again serves as Common's 11th studio album and will be available on November 4th. If you're into Common's expert pairing of R&B and hip hop, the album also includes the likes of Stevie Wonder, Marsha Ambrosius, John Legend and the homie Bilal. You can pick your favorite music provider and pre-order the album right here.

We know red wine is Common's favorite drank (when he does partake). So the question is, will it be yours? Listen to Common, Syd and Elena below and see if it's a worthy addition to your bae playlist.