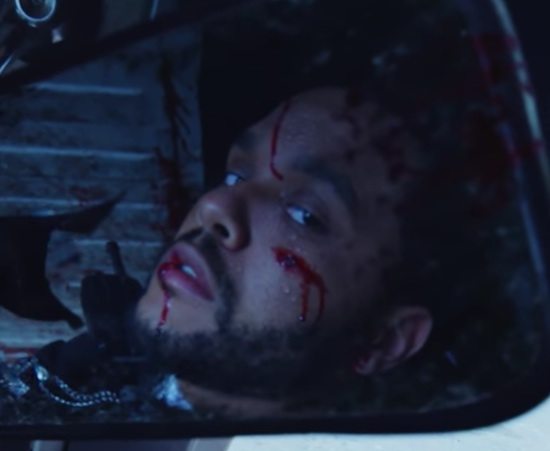 With the promotion for The Weeknd’s Starboy album in full swing, we knew it was only a matter of time before we got a video for the second single from the project, the ‘80s new wave styled track, “False Alarm.” However, no one could ever guess what the concept for the video might be. A simple clip about a girl getting off on guys admiring her beauty would be enough for your average R&B star. But not for the “Starboy” himself. Instead, we’re treated to a metaphorical clip filled with blood, bullets, angst and a lot of twists and turns.

Directed by Ilya Naishuller, the clip for “False Alarm” is a bloody, violent thrill ride inspired by video games with first-person shooters, such as Counterstrike, Halo, Dayz and Doom (for you old school gamers), along with films like Hardcore Henry. The clip puts viewers right in the middle of the action, as they’re playing the role of a bank robber in the midst of a heist. Dead bodies and quivering hostages litter the landscape as the viewer and their fellow ne’er-do-wells try to figure out how to escape. Taking a hostage, the bank robbers escape out of the back and jump in their getaway van. From there, we go on a mile a minute thrill ride where the bank robbers attempt to outrun 5-0, keep a hostage in check and try not to get killed in the process. Of course, while the getaway vehicle is making a lot of twists in turns, it’s nothing compared to the twist in the story.

“False Alarm” is yet another twisted but innovative video from the The Weeknd. The “Can’t Feel My Face” singer has crafted a number of cinematic visuals that tell twisted stories between his upcoming project and his last album, Beauty Behind the Madness. There’s even a fan theory about how they’re all connected. While we’d love to speculate on what’s going on in Abel Tesfaye’s newly sheared head, we’d also hate for any of that wickedness to rub off on us. Instead, we’ll take pleasure in just sitting back and letting the story unfold as is. We encourage you to do the same, so strap yourself in and prepare to be experience another turbulent video masterpiece from The Weeknd.