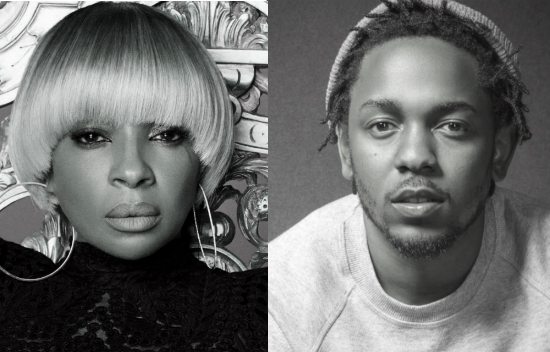 The revolution may not be televised, but Mary J. Blige and Kendrick Lamar are making sure it's heard in their new collaboration. Taking on Bruce Springsteen's 2001 single "American Skin (41 Shots)," the duo turn the rock classic into a soulful ballad. The original track was inspired by the death of Amadou Diallo, a 23-year-old unarmed African man shot and killed by NYPD officers in 1999. Unfortunately, the message continues to ring true today. If you recall, Ms. Blige made her point by singing a preview of the song to Presidential candidate Hillary Clinton on her new Apple Music talk show, The 411. While the clip of Mary serenading Hills is indeed still awkward and brought out all the jokes, the track itself is worth taking a serious listen to.

"If an officer stops you / Always be polite / And never never run away / Promise mama you'll keep your hands inside," sings Mary as Kendrick repeats "41 shots," in the background.  The chorus gets dramatic instrumentals, giving a nod to its rock origins but enlisting the help of a robust symphony. Be sure to catch K. Dot's emotional verse at the 1:30 minute mark and truly take in the message about police brutality that we all need to hear.

While Mary isn't interviewing Presidential candidates, she's kicking off her King + Queen of Hearts World Tour with Maxwell in Baltimore later this month. She also just released her first single "Thick Of It," written by Jazmine Sullivan from her upcoming album, Strength of a Woman. While we all know she's going through a dramatic divorce with partner/manager Kendu Isaacs, we're more interested in seeing and hearing more new tracks from the Queen of Hip Hop Soul so we can get back to her dancerie. Until then, listen to Mary and Kendrick's take on "American Skin (41 Shots)" right here.