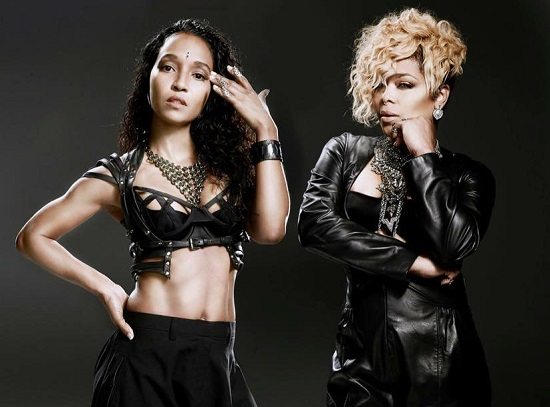 Well, well, well, look who the fall dragged in. After promising a new album and launching a Kickstarter campaign to fund the project back in January 2015, TLC found themselves the subject of fan ridicule when, come last November, no album had materialized. Though fans took to Twitter to throw a #TLCIsGoingToJailParty, Tionne "T-Boz" Watkins and Rozonda "Chilli" Thomas soldiered on, promising fans they were taking the time to make the album right. It looks like the ladies are now finally ready to show the world the fruits of that labor, as they've dropped two new singles, "Joy Ride" and "Haters," for fans to preview before their upcoming album arrives.

"Joy Ride" is a light and airy R&B groove buoyed by piano and rhythm guitar — and a little horn thrown in for good measure. The two of them trade verses in tribute to their loyal fanbase before landing on expressing sincere gratitude with the line, "Thank you for stayin’ by my side / Hope you all enjoy the ride," before the chorus. "Haters," if you didn't get the hint from the title, is dedicated to all those naysayers — and Twitter doubters — who keep running off at the mouth. Over a colder, computer-generated beat, they spit venom at those who don't wish them well before dropping some sage advice on the chorus: "Don’t you ever change / People gonna say what they say / But we don’t care about that anyway."

These are just our first tastes from the group's long-awaited album, which will also feature some unreleased contributions from the late Lisa "Left Eye" Lopez. Though they've given no official date (nor a title for that matter), we're hopeful that these singles mean something is coming sooner rather than later. Preview both songs below via Apple Music, and let us know if you're anxious to hear what TLC has been cooking up.


TAGS:  audio, Lisa "Left Eye" Lopez, Rozonda "Chilli" Thomas, Tionne "T-Boz" Watkins, tlc
Previous: Carolyn Malachi Will Make You Think Twice Before You ‘Lay A Hand On’ Someone Next: Xavier Omär Is Letting You Know He Ain’t The One On ‘If This Is Love’