Watch Erykah Badu Do It For The ‘Gram & ‘Fluffy Cuff Season’ 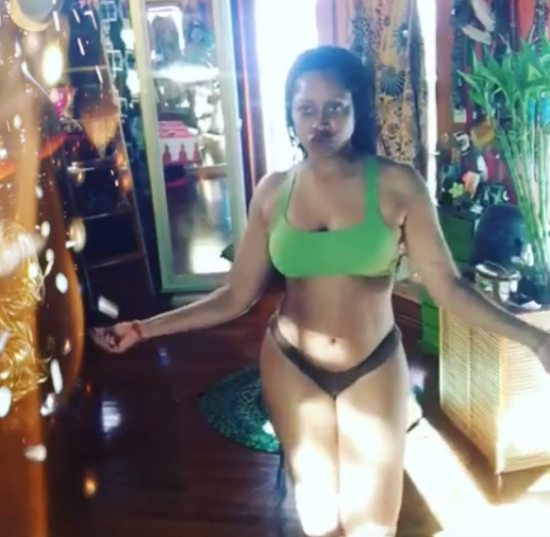 Erykah Badu might be known for her unique brand of soulful music, but this "analogue girl" sure has adapted pretty well to the new digital world. The singer has accounts on each of the big three social media networks (Facebook, Instagram and Twitter) and has become legendary for her advice, pop culture thoughts, cute videos with her kids, zany ramblings, jokes and, of course, epic clapbacks. But for the most part, what her millions of social media followers love her for is being her eccentric Badu self.

Erykah shared an unexpected bit of Baduizm with us over the weekend with an impromptu video of her cutting a rug to Maceo & The Macks “Cross The Tracks (We Better Go Back).” But while Erykah dancin' for the 'Gram is nothing new, the fact that the 45-year-old mother of three decided to do it in just her skivvies raised a few eyebrows. Whatever your comment, we see that Ms. Badu looks divine (and we're also wondering what kind of voodoo that Badu do as the reflection in the mirror behind her is showing her from the front). However, for some odd reason, it left many confused as to whether the woman dancing before them was Badu in the flesh — despite the fact that it was uploaded to her IG page by her and it's not nearly the most revealing thing we've ever seen Erykah do.

Whatever your thoughts, it's clear that Erykah has nary a f**k to give, captioning the pic, "FATBELLYBELLA ... I loooooove fluffy cuff season bye skinny b***hes #soultrainawards2016 Sunday November 27."

And there you have it. Check out Erykah bustin' a move for the 'Gram below and make sure to tune in when she hosts the Soul Train Awards once again next month.