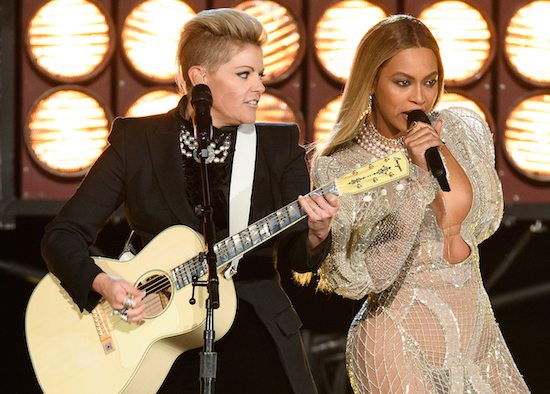 When King Bey decides to show up at the 2016 Country Music Association Awards, you better believe that the Beyhive will follow. As soon as word broke yesterday that Beyoncé would be performing at the 50th annual event, the Beyhive quickly got in formation and tuned into an awards show that many of them admittedly had never watched before. Though it didn't take much to guess that she'd likely be performing her country-tinged song, "Daddy Lessons," when and with whom she'd make her CMA debut were cloaked in mystery. Well, that mystery was solved when Bey took the stage alongside country music trio, The Dixie Chicks and the result turned the country world on its side while exposing more than a few countrified Beyhive members in the process.

Decked out in a stunning, barely-there gown and flanked by the Chicks' Natalie Maines, Emily Robison and Martie Maguire, Bey triumphantly held court on stage, effortlessly shutting down some of the naysayers who were less than pleased that she'd be infiltrating their territory. And while some audience members still seemed unable to hide their disdain (we see you, Kenny Chesney), others like Faith Hill seemed to be having a grand ol' time as they sang and clapped along.

No one appeared to be having as much fun as the folks on the stage, however. Bey glowed as usual, but it was really the energy of Maines, Robison and Maquire (including their superhype horn player) that really set the tone. Adding in bits of their own single, "Long Time Gone," the performance was truly a hand-clapping, foot-stomping one that will likely be talked about for days on end. After being practically shunned since Maines made anti-George W. Bush statements back in 2003. The feeling seemed to be mutual as Maines admitted on Twitter that she was certain that she'd never perform at the CMAs again. All of that seemed to be water under the bridge, however, as she also revealed that the Chicks jumped at the chance to join Bey onstage after she invited them.

While on paper, the collaboration may seem perplexing, fans of the Chicks were probably not shocked at all considering the girls have recently added a cover of the song to their live show. All in all, the performance was a great example of the types of cross-genre surprises that make awards shows so special.

If you just can't get enough of this Bey and Dixie Chicks collabo, then have no fear; shortly after blowing everybody's mind with this rendition, they released a studio version of the song that is available for free download via SoundCloud. Check out this historic moment right here and then be sure to take advantage of this freebie to have your own private hoedown.