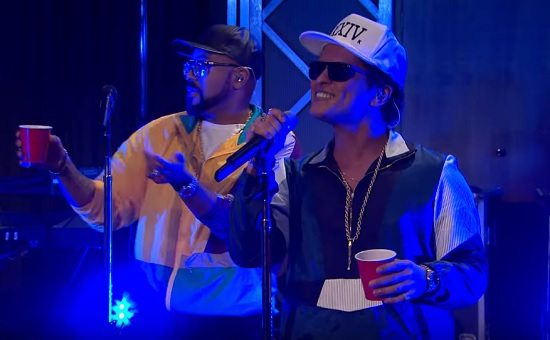 Bruno Mars has been everywhere as of late promoting his funky new single "24K Magic." Just a couple of weeks ago, he was took his playa-rific jam to the Saturday Night Live stage and got American audiences into his groove. But Bruno isn't just satisfied with taking over U.S. airwaves. He and his Hooligans headed across the pond to BBC Radio 1's Live Lounge to lace the U.K. with his funky sound.

First up, Bruno delivered a performance of "24K Magic" that lived up to the standard he's delivered both in the video and on the SNL stage. Bruno and the Hooligans rocked windbreakers and brandished red plastic cups as danced moved and grooved in the performance space. But that wasn't the only golden moment of their performance. When it came time to do a cover, which is customary when one visits the Live Lounge, Bruno decided to pick "All I Ask," the tune he crafted alongside British singer Adele for her recent album 25. With the mood slowed down and his band snapping along, Bruno delivered a tender vocal, not shying away from the high, powerful notes that Adele layered delivered in her rendition. It was actually quite lovely and a fitting song to end the set.

Check out Bruno and his crew showing out with "24K Magic" and "All I Ask" below and mark your calendars for November 18, when 24K Magic hits stores.


TAGS:  adele, bruno mars"
Previous: Meet Up With Joe & Gucci Mane For ‘Happy Hour’ Next: denitia and sene.’s Single Might Become Your ‘favorite.’