Have A Little ‘Faith’ In Stevie Wonder & Ariana Grande’s Collaboration 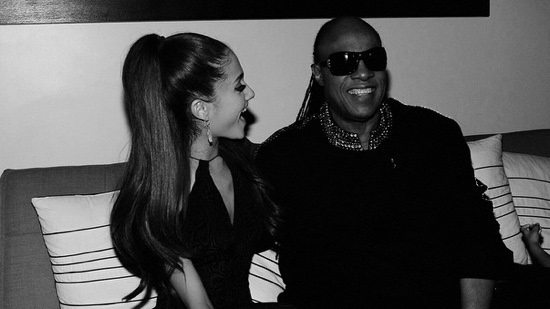 'Tis the season for cutesy animated movies to fill your local cineplex. What's different with this year's crop, however, is that many of them feature music as an essential part of their plot. Dreamworks' Trolls, which features infectious single "Can't Stop The Feeling!," is already in theaters now and the next animated musical, Illumination Entertainment's Sing, will arrive this December. But before it does, we're getting a taste of the soundtrack thanks to an unexpected collaboration from music legend Stevie Wonder and pop star Ariana Grande.

The unlikely duo come together for the the film's song "Faith," which finds Stevie revisiting a classic '60s soul sound. Bluesy guitar, hand claps and horns round out the sound of the number, with Stevie opening the track singing about a saucy little number with diamonds in her shoes. Ariana follows in his footsteps to sing about a fella with "Stevie Wonder swag." The twosome play together quite well, with Stevie allowing room for Ariana to strut her stuff while still showing why he's been an industry staple for more than 50 years.

Stream "Faith" via Spotify below and look for the soundtrack, which features appearances from Jennifer Hudson, Tori Kelly and Scarlett Johansson, in stores on December 21st.