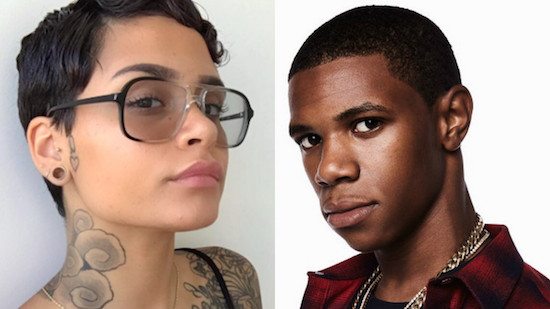 To say that Kehlani has had quite a year would be an understatement. After kicking off 2016 with her first GRAMMY nomination and red carpet appearance, things seemed to come crashing down just a few months later when she was embroiled in some relationship drama that led to her being attacked on social media and ultimately attempting suicide in response. While that could have easily been the end of this rising star's story, she has since risen from the ashes, stronger than ever. She performed at this year's ESSENCE Festival in New Orleans and is prepping for the release of her first studio album, SSS, which is expected sometime next year. She celebrated her triumphant return with the release of her single, "CRZY," back in July and the Benny Boom-helmed visuals that dropped in September. Not ready to slow things down on the "CRZY" front, she returns with a remix of the song featuring up-and-coming rapper A Boogie Wit Da Hoodie.

Here, the term "remix" is used loosely as the only thing that has changed this time around is the added verse from A Boogie. Though fairly new to the game, he's already been co-signed by Drake and profiled in the New York Times and Forbes. He quickly proves why, making the best of his 16 bars as he rhymes about the path that has brought him to this point. Even with the song being several months old, it still goes hard and serves as a celebration of the adversity Kehlani has encountered on her own journey to the top. As she sings, "All this s**t I've been through and it made me more real than assassin / I kill 'em, I kill 'em, I kill 'em with compassion," you can't help but cheer for the resilience and confidence she exudes as she flexes on her haters. We all could likely take a page out of her book on how to keep on keeping on even when it seems like your back is against the wall. Get into the song once again, and be sure to check out A Boogie's SoundCloud to see what made Kehlani tap him for the remix in the first place. Kehlani's "CRZY (Remix)" is currently available on iTunes, Amazon and Google Play.