Keke Palmer Introduces Us To ‘Lauren’ With Visual EP 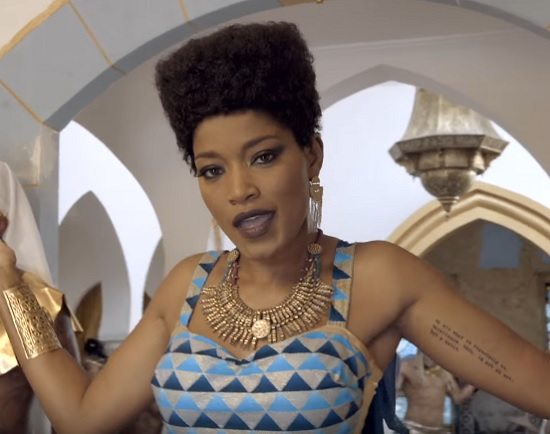 Though we've literally watched starlet Keke Palmer grow up before our very eyes, it's still kind of shocking to see how the now-23-year-old has grown into her own woman. The actress/singer/dancer has gone from Akeelah And The Bee to Scream Queens and from the cutesy tween pop of her early recording days to the adult-themed sound of her more recent tracks. Now the talented Ms. Keke jumps on the visual album trend with the release of her visual EP.

Lauren (a nod to her government name, Lauren Keyana Palmer) consists of five tracks — "Doubtful," "Got Me F**ked Up," "Jealous," "Pressure" and "Hands Free" — each highlighting different aspects of her life. "Doubtful" finds her being honest about her inability to be vulnerable in love. The song uses minor chords and stuttering 808s and drums to get her point across, while the visual features her walking through a somber, rainy scene of underwear-clad dancers arguing as she surveys it all through the dark lenses of her shades. "Got Me F**ked Up," on the other hand, is fun and very colorful. The corresponding section of the visual finds Keke and her girls (including potty-mouthed puppet Cousin M) getting ready for a night out. As she puts on a wig and clothes, she sings about dudes who think they know what's she's all about over a bass-laden, snap-filled beat.

On "Jealous," Keke reps for her Chicago home while flexing her rhyming skills and sending out a warning to those that think they know her from their TV screens. Donning a red wig, she struts her stuff in her hometown while giving us '90s throwback vibes with group dancing shots and scenes of her and her crew chilling in her hood. She keeps the red wig and takes to the studio for "Pressure," a sensual jammy-jam about a fella laying the moves on pretty thick. However, as sexy as the pulsing drums and midnight mood of the synths are, she's reluctant to give in to his whims. However, by the final track, "Hands Free," those inhibitions are gone. The dancehall-tinged track finds Keke ready to get freak nasty with her boo as the visual shows her becoming an Egyptian queen among half-naked male subjects.

Overall, the visual album finds Keke asserting not only her adulthood but her evolution as a woman. Everything on the set won't be for everybody (and we're sure her language on many of the entries will turn off most still expecting "child star Keke"), but we suspect that this is only the beginning of her finding her musical footing. Will you be checking for Lauren? Peep the visual and stream the EP via Spotify below to find out.