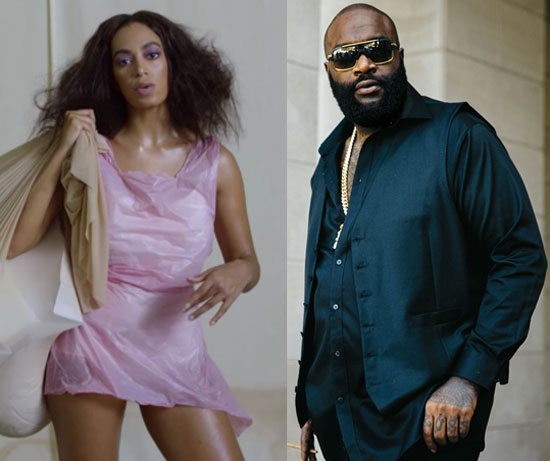 Is “Cranes In the Sky” the new “Hotline Bling?” Possibly. It seems like there’s a new remix of the song every week. Produced by Raphael Saadiq, the old school boom bap beat with the classical strings and bass guitar is a hypnotic piece of music that any MC, singer or producer of the hip-hop generation would be compelled to bless. Kaytranada produced his own special edit of the song, Common made the song even more lit with a scorching hot 16 and even Styles P gave us his own version, “Ghost In the Sky.” Now the boss of all bosses, Rick Ross, adds the eponymous “Maybach Music” tag and a quick verse to Solange’s smash hit.

Of course, the question of all these remixes is whether the artist is here for the beat or the context of the song? Obviously, Ross isn’t above making a song cry, but he’s not going to let any water hit the pavement on a remix. If he refused to stop flossing for a song about poverty -- remember Lorde's "Royals" Remix? -- we doubt he'd stay on topic for a song about depression. Instead of getting in his feelings like Solange, Ricky Rozay instead talks about how life is good (“Crib so big, Cranes in the sky”), how he’s upgrading chicks (“Ross Fit / I put her up on hot yoga, wheat grass, shots of ginger) and, of course, WingStop. However, there are a few clever lines such as, "Dirty money so I got a laundromat,” but for the most part, it’s business as usual.

While Ross’ remix feels a bit tacked on and about the exact opposite of the intent of the song, extravagance and flossing instead of escapism and coping mechanisms, we aren’t mad. We aren’t sure if we’ll ever get tired of the song, and any excuse to jam out to it is a good one, even while shouting “Maybach Music!” when the beat drops and dancing away our feelings.