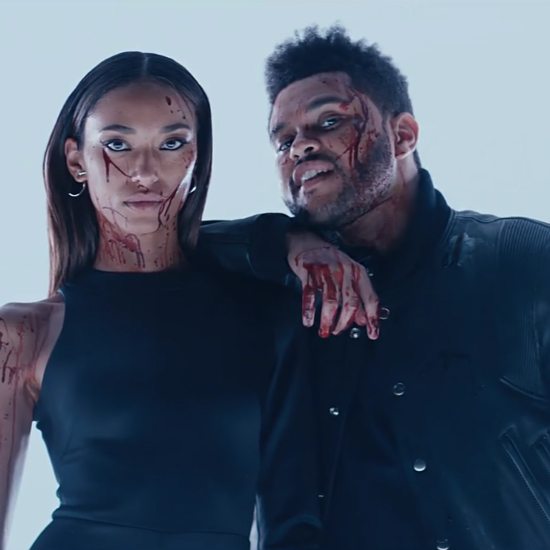 With The Weeknd’s highly anticipated new album, Starboy, set to drop on Black Friday, the “False Alarm” singer has been releasing more tracks and doing more promotion for the upcoming set. Today, he’s blessed us with a short film experienced entitled Mania. Directed by frequent collaborator Grant Singer, the over 11-minute “visual piece” gives us a preview of songs from Starboy, while telling another dark, twisted story we’ve come to know, love and expect from the talented Mr. Abel Tesfaye.

The experience begins with a scene of an ebony panther in the middle of an all white stage composed of various geometric platforms, the song, “All I Know” featuring Future playing, as the panther is flashed and photographed.

The film then quickly cuts to our anti-hero, The Weeknd, driving a burnt orange Lamborghini Aventador (the new McLaren 570s we think) up a mountain at dusk, while laying down a hot flow from the song “Sidewalks,” bragging, “My flow too sick, Kevin Costner couldn’t touch me.” Meanwhile, we see cut scenes of the panther against a dusk background. This scene is an obvious homage to Kanye West’s “Dark Fantasy” video from his own short film, Runaway .

Finally reaching his destination, The Weeknd parks his car in a back alley, puts on a cap to hide his signature haircut, and makes his way through the back entrance of a club as the track "Secrets" plays. Dancing in the middle of the floor on a dais is French model Anais Mali. While the star and his leading lady try to play it cool in the vid, the chemistry between the two is obvious and undeniable.

As the song dies down, we are treated to close ups of the pair as they move closer to each other, embrace and dance to "Die for You," their surroundings just out of focus except for an ominous face in the crowd (which has become almost standard for The Weeknd videos). Unfortunately, Mr. Tesfaye can't even take a bathroom break without the haters trying to get at him, as the ominous face in the crowd approaches him from behind with a knife. However, just when the assailant strikes, we hear a growl, see blood splatter on the wall and when all is said and done, our girl Anais has taken care of The Weeknd's light work. The two go back to the festivities as if nothing’s even happened, some blood splatter still streaked across their faces, while “Party Monster” plays, The Weeknd pining “I just need a girl who gon really understand.”

After a long night of dancing and killing, the couple returns to the original setting, Anais standing still and regal like the panther at the beginning of the video, while The Weeknd dances with a somewhat goofy wink, wink, nudge, nudge around the visage of his perfect woman, as “I Feel it Coming” plays. It’s a bit of a disturbing scene, as we see The Weeknd displaying more energy and emotion than we’re used to, as he feels right at home in this ominous setting of blood, lights and happy-go-lucky music.

Once again, The Weeknd delivers a dark, though imaginative, take on the boy-meets-girl narrative. Instead of Abel being the hero, it is the woman, strong, fierce and loyal, who comes through to save the day, and the lovers celebrating by washing themselves in proof of their love. It's twist isn't just dark for the sake of being dark (or maybe it is), but it actually makes a play on our expectations. Haunting yet poignant, dark yet somehow humorous, it’s another simple video concept executed exceptionally well by the Canadian playboy.