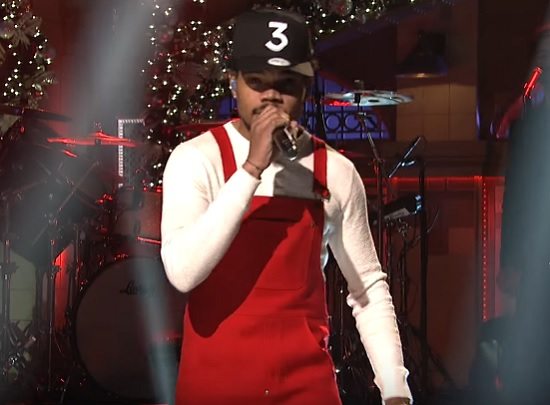 Chance the Rapper's 2016 was pretty huge. In fact, in some ways, it was history making. Not only did his latest mixtape, Coloring Book, celebrate a number of firsts for an independent artist (including becoming the first streaming-exclusive set to chart on the Billboard 200), it also completely upended the eligibility structure for the GRAMMYS while snagging a nom in the process. Over the weekend, he took his 2016 victory lap to Saturday Night Live and managed to bring some funny to the proceedings as well.

Before he even took the stage in Studio 8H, he first appeared in the hilarious and bittersweet short "Jingle Barack," in which he and perennial SNL castmember Kenan Thompson took a riff of '80s rap pioneers Run-DMC's "Christmas In Hollis" to commemorate America's last holiday season with President Barack Obama in the Oval Office. While the fellas were focused on Barack (and even pulled in real-life DMC Darryl McDaniels), Leslie Jones channeled her inner Salt-N-Pepa to proclaim her desire to sit in Vice President Joe Biden's lap — and not to read him her Christmas wishlist either.

Chance continued to bring it with his performances. First up was a medley of "Finish Line/Drown." Dressed up like a Mario brother, the Chi-Town rapper opened the set by wishing Jesus happy birthday before bouncing around the stage as he rapped the uplifting "Finish Line" with gusto. Soon, Noname came out to bless the crowd with her spoken word/rap verse before the backing singers went full-on church choir as they took it home and sang the Lord's praises.

Chance's second song of the night was "Same Drugs," which found him sitting at the piano as he warbled the song's opening lines. But as he finished the first verse, his homie Francis & The Lights took over the piano duties as snow fell on the stage and one of his backing singers sang for her life, hitting all the notes the sometimes-singing rapper might've missed.

All in all it was a good show and a great way to end the year for SNL. With all the musical excellence present on the season's first half, we can't wait to see who will take the stage in 2017.