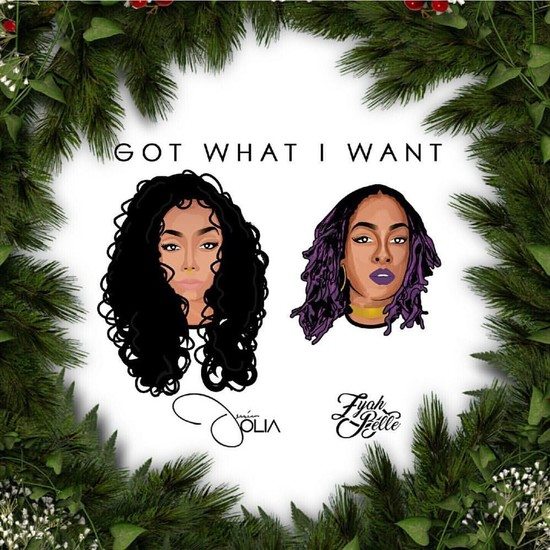 Christmas standards and modern-day holiday classics are a necessity during the Yuletide season. But that doesn't mean we don't look forward to hearing something fresh and original come this time of year. Artists like Khia, Big Freedia, Chance the Rapper & Jeremih, Black Spade and The Hamiltones (to name a few) have already come through with some unique additions to our festive playlists. Now, L.A.-based singer Jessica Jolia teams with fellow Californian Zyah Belle to deliver a festive trap-soul jingle called "Got What I Want."

With frosty production by The Sound of Keys and Zarro Capisce and well-placed instrumentals by Lin Rountree  (trumpet) and Lamar Mitchell (harpejji), Jolia and Belle deliver a chilled-out ode to the joys of the season. The duo isn't asking for much as their wishlist reveals, "New car, two-seater, gold watch, fresh Adidas, laced up like a ballerina." Both women infuse their vocals with some serious soul, and their smooth tones compliment each other so perfectly that it's almost impossible to tell where one voice ends and the other begins. We're loving their airy harmonies and can only hope this won't be the last time they collaborate.

Relax and mellow out to the new song below which is available for purchase via iTunes. Jessica Jolia has also got you covered for cuffing season with her bonus track "Kiss My Skin," currently streaming via SoundCloud. We recently caught Ms. Jolia's vocals live singing background for Eric Benét, so we know of her talent first-hand. She'll be doing some solo shows in the new year, so be sure to visit her website to keep up with her busy schedule. Zyah Belle is also working on some newness, so get acquainted with the up-and-comer via her website as well.