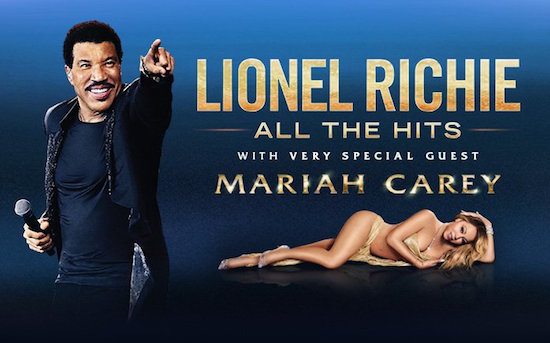 2017 hasn't even arrived yet, but it is already shaping up to be quite a year for tours. Just in the past week alone, Charlie Wilson, Kehlani and Thundercat have announced multi-city tours that kick off early in the new year. Now, Lionel Richie and Mariah Carey are throwing their hat into the mix with their newly-announced North American tour.

Billed the All The Hits Tour, the 35-date concert tour marks the first time the two musical icons will share the bill together. It also marks the first North American tour for Carey in more than six years. The show is set to kick off March 15th in Baltimore before winding down in Fort Lauderdale on May 27th. Both Richie and Carey took to social media to announce the news, with Richie tweeting he was "excited to be performing #AlltheHits" while Carey shared her "big news" with her nearly 17 million followers.

Tickets for the tour go on sale on Saturday, December 17th via LiveNation.com. If you can't wait to see Lionel live and you live in the DMV area, the former Commodores frontman will be one of the first acts to perform at the newly opened MGM National Harbor on Thursday, December 22nd. Carey meanwhile is currently in the midst of her annual holiday residency at New York City's Beacon Theater. Now in its third year, All I Want for Christmas Is You, A Night of Joy and Festivity coincidentally wraps the same day that tickets for the Lionel Richie tour go on sale.