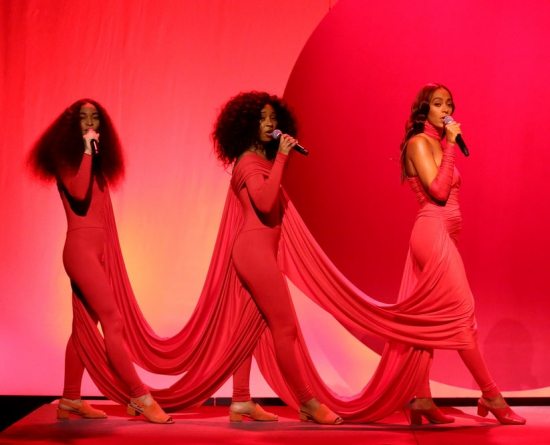 Solange capped off a stellar year by landing her very first GRAMMY nomination for her emotional ditty "Cranes In the Sky," the lead single for her critical darling of an album A Seat at the Table. And after marking another first off her list with her Saturday Night Live performance, the singer/songwriter delivered another visually mesmerizing performance on last night's edition of The Tonight Show Starring Jimmy Fallon with a medley of two of the album's songs, "Rise" and "Weary."

With the stage and her band covered in red, Solange and her backup vocalists stood on stage draped in gorgeous scarlet outfits connected to each other by swaths of fabric, a similar look to one she donned in her "Cranes In the Sky" video. The trio moved in unison as they sang to the beautiful keys of "Rise" and then switched to a more interpretive dance as the vibey bass of "Weary" kicked in. Solange then took her place center stage as the singers moved and grooved behind her. With the nerves that were visible during the SNL mostly gone, Solo delivered a capable vocal and stepped even further into her own.

With each performance so far being very visually appealing and Solange growing in confidence, we can't wait to see her take this show on the road. Check out Solange bringing her art to The Tonight Show stage below.


TAGS:  solange, The Tonight Show Starring Jimmy Fallon
Previous: Morning Soul: I Lose Myself In Daylight Next: Get Your ‘Party’ On With Chris Brown, Usher & Gucci Mane