The Weeknd Takes ‘Starboy’ To The Stage For Vevo Presents 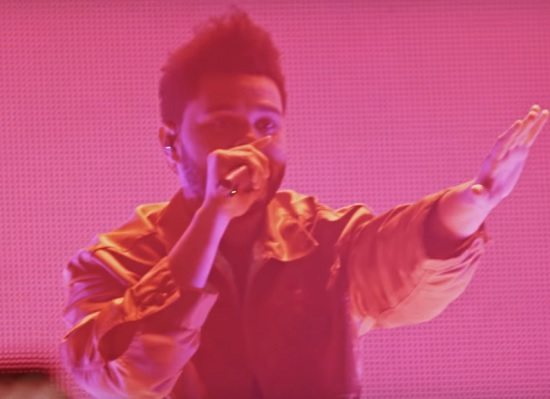 The Weeknd has ruled the charts with Starboy, his latest aim at pop stardom. While the set is tinged with his usual dark undertones, the Canadian R&B star moved even further into the pop realm with this latest effort and his fans are eating it up. He's taking advantage of the buzz, getting ready to hit the road with his Starboy: Legend of The Fall Tour and performing as often as he can, recently blessing the stages of the American Music Awards and the Victoria's Secret Fashion Show. He also took the stage for Vevo Presents recently, delivering a mix of old and new hits and even a special guest.

Weeknd took the stage among an elaborately lit setup featuring wall-to-wall screens and kicked things off with title track "Starboy." He then moved into other Starboy tracks like "Secrets," "Reminder" and "False Alarm." However, the big surprise was Young Abel trotting out current rap king Kendrick Lamar, who strolled out onto the stage and dapped up The Weeknd as he lit into his verse, for their collaboration "Sidewalks." But it wasn't an all-Starboy party, as The Weeknd also delivered other popular cuts like "Can't Feel My Face" and "The Hills" to walk fans back down recent memory lane.

If you're a Weeknd fan and want a preview of what to expect for his live show, check out his Vevo Presents clips below. After that, you can scoop tickets to his upcoming tour and check tour dates on his website.


TAGS:  kendrick lamar, The Weeknd
Previous: Morning Soul: From Now On Your Troubles Will Be Out Of Sight Next: Alyson Williams & Dean James Wish You A ‘Happy Holiday’