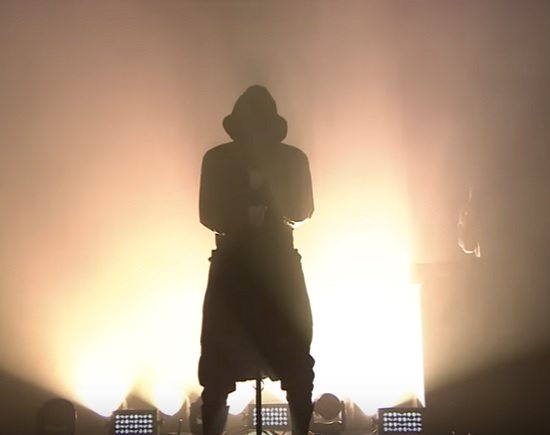 Everything might be merry and bright for the holidays, but don't tell that to Yasiin Bey and Ferrari Shepherd. The twosome, who together make up new duo Dec. 99th, brought their slightly dreary aesthetic to The Tonight Show Starring Jimmy Fallon to commemorate the release of their self-titled album as an exclusive stream on TIDAL. While there are several memorable tracks from the set, they decided to bring a medley of "Seaside Panic Room" and "N.A.W." to the stage.

With the stage awash in multicolored lights, the two remained in shadow for the duration of the performance. Bey stood front-and-center, draped dramatically in a black hood that obscured his face even more as he ripped into his rap from "Seaside Panic Room" over the bump of drums and clash of cymbals. Soon, though, they moved on to "N.A.W.," where the artist formerly known as Mos Def tapped into his black rocker persona. The song, with its world-weary message, wasn't exactly what you'd expect this close to the Christmas, but it was a visually arresting performance nonetheless.

If you're up for something a little less cheery and a little more dark, look no further than Dec. 99th's Tonight Show debut. Catch it below.