Alicia Keys Praises The Lord On ‘That’s What’s Up’ 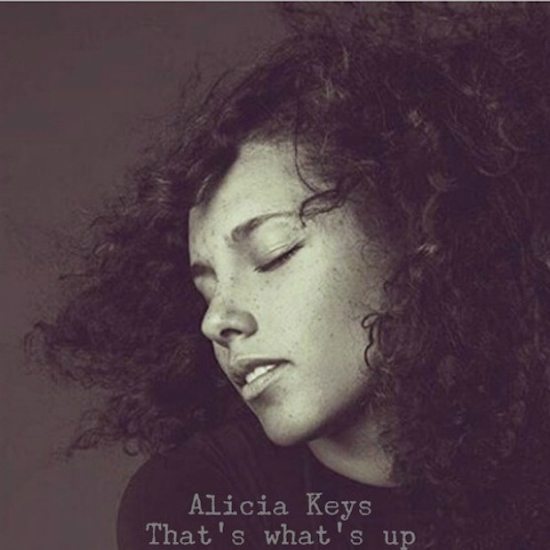 On Wednesday, January 25th, Alicia Keys celebrated her 36th birthday. However, instead of asking fans for gifts or to contribute to one of the noted philanthropist’s favorite charities, she took it easy and quietly shared a new song, “That’s What’s Up,” on Facebook. While her most recent album, Here, received little fanfare besides the lead single “In Common,” she continues her grind -- even on her birthday. She surprised us with a whimsical ditty “Sweet F-in Love,” produced by Kaytranada, and now continues her less serious but somewhat sensual vibe. However, instead of a love song, Alicia is giving us her testimony, praising the Lord and giving thanks for 36 beautiful years of life.

Over a reworked version of Kanye West’s “Low Lights” from his Saint Pablo LP, Alicia gives us runs, melisma and random lyrics for days, while giving honor to God for all that he has given her, “You never let me down / Now that’s what’s up!” Of course, it seems like “That’s What’s Up” is still in the demo stages and isn’t quite a fully realized song, so we can forgive some of the quirkiness. Though telling God, “That’s What’s Up” for all the things he’s done for you is charming, it might get a side eye from your favorite mean old church mother.

In the accompanying video for the song, the Alicia goes where most people go to lay their burdens down: the bathroom. In a crackly homemade video clip, we watch as Alicia saunters through her apartment in a white robe with her hair tied up in a white towel, draws a royal bath, relaxes in her tub amongst the bubbles, drinking a glass of pinot noir and letting Calgon take her away as her song wails background. Mariah Carey would be proud.

We aren’t sure whether Alicia is planning a project to coincide with her hosting duties on The Voice, whether she’s just playing around in the studio or if these are just a couple b-sides she's decided to liberate. In any event, we’re here for it. These last few tracks have shown Alicia taking herself, but not her art, a little less serious, creating smooth grooves we can vibe to and let the worries of the world wash off our weary souls. It’s a good look and a good move.