Anderson .Paak & His Son Rock ‘The Ellen DeGeneres Show’ With ‘Am I Wrong’ 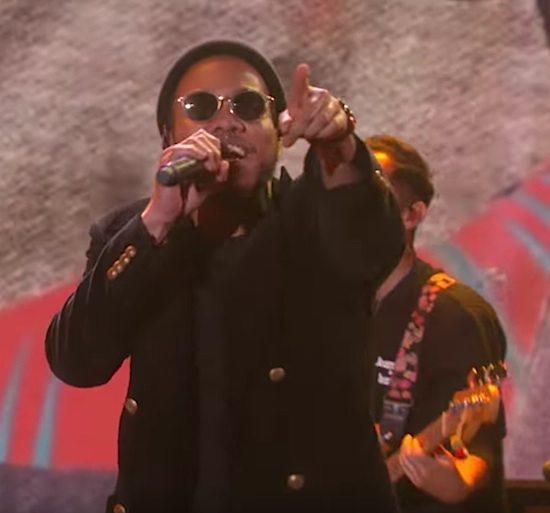 If you thought that Anderson .Paak would lose steam after ruling 2016, you thought wrong. Andy P is still the man — and even has the GRAMMY nominations to prove it.  If you need further proof, then look no further than his recent appearance on The Ellen DeGeneres Show. The Emmy winner had him on her talker because she loves him so much (her words, not ours) and needed somebody who could rock the house for her birthday. Not only did he not disappoint, he also brought out a special little surprise sure to bring a smile to your face.

Anderson fittingly chose the party starter "Am I Wrong" to get the audience on their feet. He grooved on the stage backed by his talented band The Free Nationals helping him set things off. But this performance was just about our boy showing off. After hopping on the drums, he invited a special guest on to the stage as the beat switched: his 6-year-old son, Soul. Clad in a white tee, black jeans and a black moto jacket, the pint-sized show stopper cut a rug with his pops to Malibu track "Lite Weight" as confetti poured onto the stage.

While it was nice to see Ellen's outpouring of love for Anderson, we must admit that we're still stuck on the cuteness overload of the father-son duo. And, based on his love of the crowd, we think that Soul might just be ready for his close up. Peep the family fun that went down on the Ellen stage below and be sure to catch Anderson at this year's GRAMMYs and when he hits the road with Bruno Mars in Europe this spring.


TAGS:  Anderson Paak, ellen degeneres", The Ellen DeGeneres Show, The Free Nationals
Previous: Johnny Popcorn Stand & ‘Fall’ Together Next: K.Avett Gets To The Heart Of ‘The Matter’