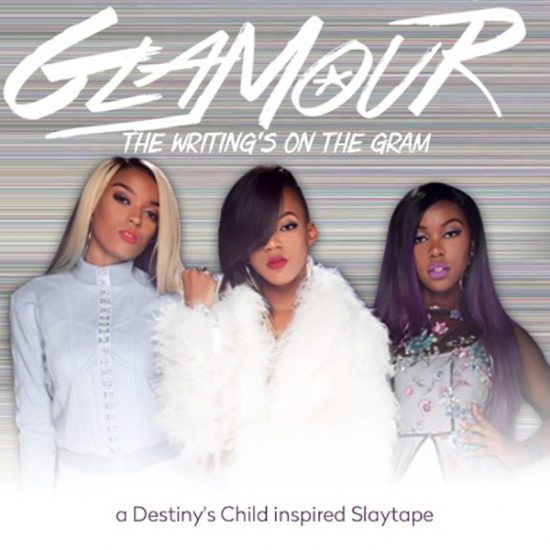 The music business can be a fickle beast. Some aspiring artists are lucky enough to experience (seemingly) overnight success while others struggle for years to gain recognition. We tip our hats to those that stay on their grind. One such group is Atlanta-based trio Glamour.

Since earning themselves a 2013 stint on X-Factor where judge Kelly Rowland dubbed them as "Baby Destiny's Child," Kaylan, Moriah and Ydal have spent the past few years building a YouTube fanbase and refining their sound under the mentorship of Kandi Burruss. Now, the Kandi Koated Entertainment signees are slowly reaping the benefits of their hard work. In addition to landing an upcoming appearance (or two) on FOX's Star, the ladies are preparing to release a brand new single titled "BAE" on January 23rd. While we wait for those debuts, they've decided to pay homage to the girl group that inspired them most (hint: it's not Xscape) with The Writing's On The Gram.

The mixtape (or "slaytape" as their calling it) features Glamourized versions of nine Destiny's Child jams (well, ten if you count Beyoncé's "Dangerously In Love"). There are also two originals "We Are the Turn Up" and "Bye Felicia," plus a snippet of their new single "BAE." Burruss-penned "Bills, Bills, Bills" gets a sexy revamp courtesy of a healthy sprinkle of Ciara's "Promise," while "Say My Name" takes on a steamier vibe by getting cozy with The Weeknd's "Earned It." "Bootylicious (Aka Jelly)" shakes off its playful vibe and aims for a bit more edge with Ty Dolla $ign's "Campaign," and "Survivor" is transformed by an interpolation of Aaliyah's "Rock the Boat." Rounding out the set are a swag-deficient version of "Soldier," a trap-soul flip of "No, No, No," an a cappella rendition of DC's Bee Gees remake of "Emotions" and an impressive take on "Independent Woman."

Glamour indeed slays some of DC's biggest hits. We'll let you be the judge of which connotation of the verb applies after you listen to The Writing's On The Gram and watch the videos below. Personally, we think the teens may have been a bit too ambitious with this undertaking. It's not a question of talent; the girls have already proven they can deliver intricate harmonies and eye-catching dance moves. But if they're ever going to make a name for themselves, maybe they (or their label/management at least) should channel all that energy into putting out some more original music. Nevertheless, we give them props for their effort and look forward to hearing more from them in the future. In the meantime, you can pre-order "BAE" and keep up with Glamour on "The Gram" and Twitter. As for the real Destiny's Child, we're still keeping our fingers crossed that Bey, Kelly and Michelle Williams will regroup for another album.