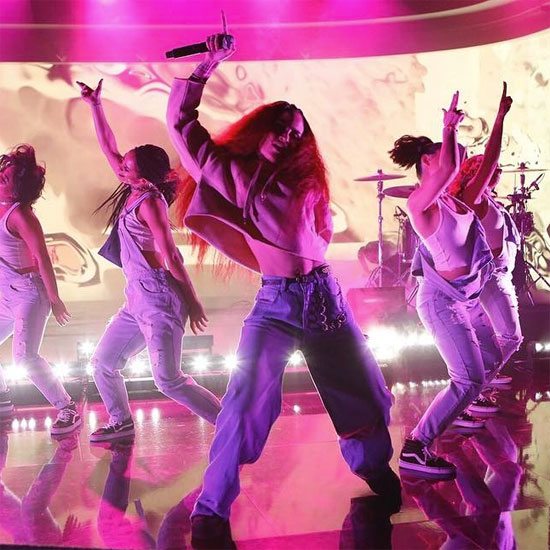 After traveling a rocky road for a bit of 2016, Kehlani turned things around for the latter half of the year and released a steady stream of singles -- "CRZY," "Distraction," "Gangsta," "Table," "Advice," "Undercover" and "Do U Dirty" -- in the lead up to her debut album being released. Today said album, SweetSexySavage, is finally here and Kehlani celebrated the release on the Jimmy Kimmel Live! stage.

For the occasion, Kehlani decided to get a little "CRZY" and perform the single for her late-night TV debut. Flanked by four dancers and switching out her dark brown pixie cut for a long red wig, Kehlani was met with applause after Jimmy Kimmel's enthusiastic introduction. Lani and her girl gang were in sync with their contemporary choreography and twerking while she sang about how much of a bad chick she is.

It was an entertaining performance overall, but the only thing missing was a spotlight on Kehlani who was in shadow for the entire time. If you were unfamiliar with her before she performed on Kimmel, then you likely wouldn't be able her out of a lineup after the show either. But for all the Kehlani fans out there who do know what she looks like, your girl delivered. Get into her short but sweet performance below and take the deluxe version of SweetSexySavage for a spin while you're at it. Add SweetSexySavage to your album collection and pick it up from Amazon, iTunes or Google Play now.