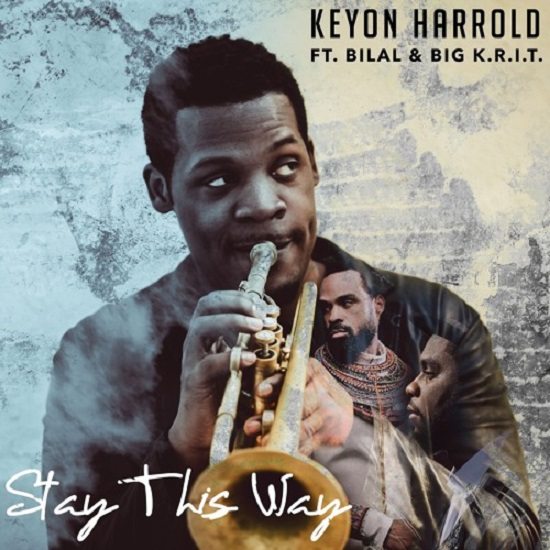 Trumpeter Keyon Harrold might not be a household name, but if you've listened to most R&B, hip-hop or soul records that have been released in the past few years, chances are you've heard the skilled blare of his trumpet a time or two. Harrold has been featured on the works of artists like Common, Jay Z, Gregory Porter, D'Angelo and The Vanguard, Erykah Badu and Beyoncé, and that's just naming a few. This year, he's gearing up to drop an album that will, interestingly enough, only be available as a "listen only" release. While the exact release date for the project hasn't been announced, Keyon's giving us a first listen with lead single "Stay This Way," which just so happens to feature frequent collaborator Bilal and Big K.R.I.T.

"Stay This Way" is a love song for sure, though whether it's about love lost or found can be up to interpretation. It begins with soft piano that is soon followed by Keyon's muted trumpet, which sets an almost melancholy mood. Once Bilal's noticeably restrained vocal comes in, it seems that he's singing of a longing for love just beyond his grasp. Underscored by Keyon on trumpet, it creates an urgency that's felt throughout the song as Bilal's voice and the instruments play off of one another. However, K.R.I.T. builds upon the verses, adding yet another layer as he asks that, throughout love's ups and downs, that what he's found remains the same throughout all time. So, we guess, depending on what facet of love you happen to be looking at in your own life, you can find a part of this song that relates to it.

"Stay This Way" is without a doubt a satisfying listen and definitely has our interest piqued as to what Keyon will be bringing with his upcoming album. See what we mean when you press play. As well, if you live in the NYC area, be sure to catch Keyon, Bilal and K.R.I.T. during his residency at the Blue Note, which begins this week on January 10th and continues in March and May. More details and ticket information can be found on Blue Note's website.