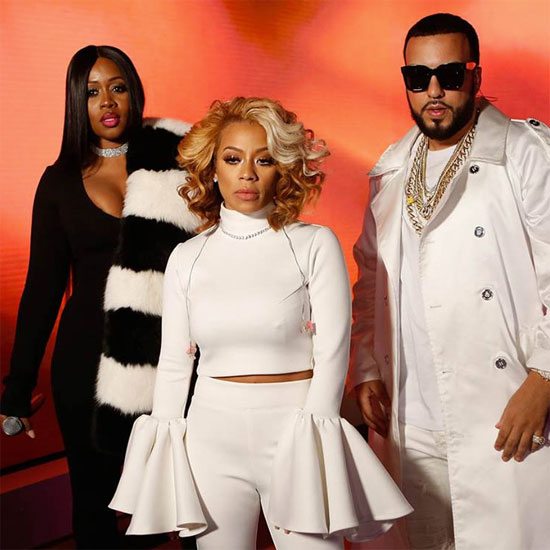 Keyshia Cole's back and she isn't here for any nonsense from her ex on her new song, "You," the first single from, 1111 Reset, her upcoming seventh studio album and first on new label home Epic Records. Cole addresses old boy directly and dresses him down with lyrics like, “You just played me for the last time / I’m done f**king with you," over a sample of P.M. Dawn's "Set Adrift On Memory Bliss." In case he still didn't get the message, Cole gets an assist from Remy Ma and French Montana whose respective bars leave no room for doubt.

Keyshia and the gang took her message to Jimmy Kimmel Live! on Monday night for the first television performance of the track. Dipped in a white ensemble with dramatic ruffles at her wrists and knees, Keyshia sang a censored version of "You" while backed by four female dancers and her band. There was just a hint of struggle in Cole's live vocals, but before they got too out of control Remy Ma saved the day. She sauntered onstage in a black catsuit and black and white fur wrap perched on her shoulder that would get Cruella de Vil's approval and spit her bars that were the equivalent of a middle finger to the song's unfortunate subject. Keyshia followed up with the chorus once again before French Montana joined her in a matching white outfit (minus the ruffles) to kick his verse on the bridge. The performance ended on an odd note -- literally -- with Cole a bit winded and sounding glad for it to be over. She wasn't the only one.

So who is the object of Keyshia Cole's disgust on "You"? It's none other than her ex-husband Daniel “Booby” Gibson, and 1111 Reset will chronicle their messy divorce. If "You" is any indication, get ready for even more messiness and drama when 1111 Reset is released. For now, you can add "You" to your collections and purchase it on Amazon, iTunes or Google Play.