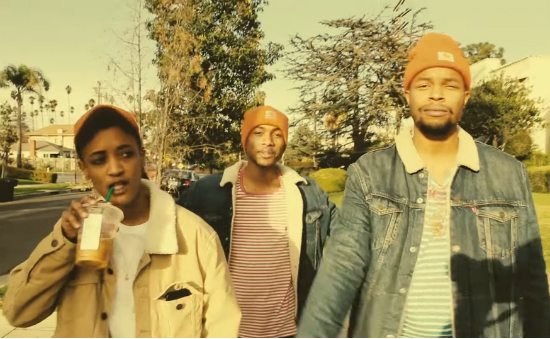 The Internet has perfected the art of being in a group, and now they're showing us they can go at it alone, too. The crew has been rolling out solo projects, with Syd dropping two singles from her upcoming album Fin and guitar player Steve Lacy recently putting his bid in with his debut track "Some." As if it couldn't get any better, today co-founder Matt Martians drops his first solo album, The Drum Chord Theory, and christened the release with his second single and new visuals for "Dent Jusay." The song produced by Tyler, The Creator features bandmates Syd and Steve, who also join Matt in the self-directed video.

The video follows the trio wearing matching outfits, as they strut through Los Angeles dancing and enjoying some beverages from Starbucks. With unique views courtesy of some in-your-face camera angles, the video is interesting and jovial like the track. "Dent jusay, you wanna fly away someday / So won't you roll with me then?" the trio sing in the upbeat chorus. The single is a walk in the park, much like the video, and has us more than ready to hear more solo hits from the genius crew.

Matt released the first track from the album, "Diamond In Da Ruff," earlier this month and we won't have to wait too long for Syd's solo album, Fin, since it arrives on Friday, February 3rd. The band will wrap up the winter with their upcoming tour through March, and if you're able to make a show, you get the pleasure of seeing solo sets from each of The Internet’s five members.  You can cop Matt's new album today on all digital retailers and stream it right here after you watch his latest video for "Dent Jusay."