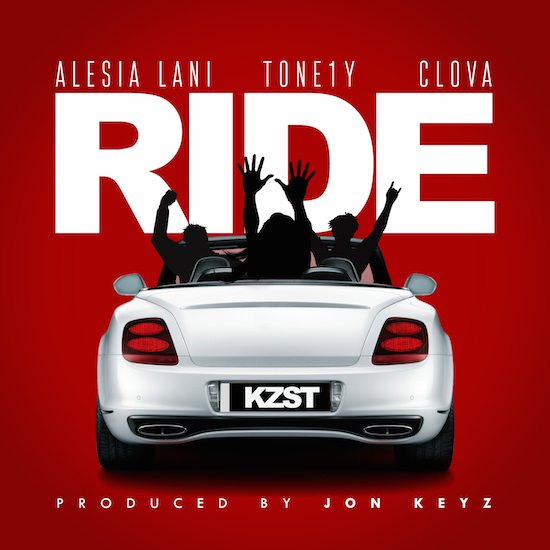 The temperatures outside right now might be a bit too chilly to drive with your windows or top down, but don't let that stop you from enjoying the new single, "Ride," from Alesia Lani, Tone1y and Clova. We suspect that even though the weather may not be ideal at the moment, this upbeat track from producer Jon Keyz will find you in your whip with the heat on full blast and driving around town to get the most mileage out of this new riding anthem that SoulBounce is world premiering today.

Over twinkling keys, a hard-hitting drum pattern and funky synths, Tone1y gets in the driver's seat to lead things off. He calls bae-to-be and lets her know that he's on his way to pick her up. He's down for whatever, including a little, "Party or chill / Drink and chill / Smoke and chill." Alesia Lani slides into the passenger seat on the second verse. She's feeling the vibes but she wants to slow things down a little. "Baby, I believe in taking time / And with a little patience all the stars will align," she sweetly sings and puts the brakes on things.Tone1y might have gotten friend-zoned by Alesia, but Clova adds a little levity to the situation with his rap verse from the backseat.

"Ride" is a fun R&B song that isn't just well suited for riding out with your squad but for partying with your crew, too. You'll find your head nodding, feet tapping and body moving in no time after you press play. Word on the street is that Alesia Lani has more newness coming in 2017, so be sure keep up with her on Facebook, Twitter and SoundCloud.